Escape From the Museum–If You Can! 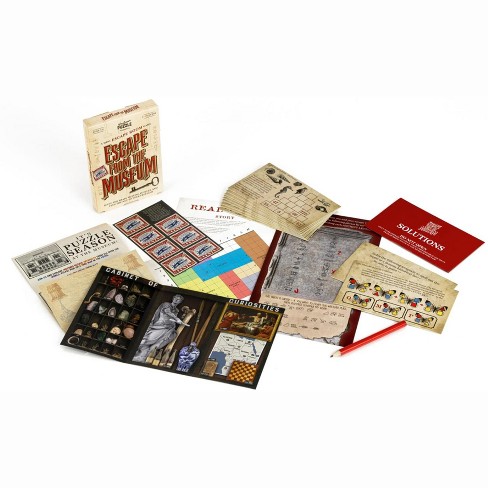 If you’ve ever done an escape room, then you know the fun of finding clues and solving puzzles before the clock runs out. The claustrophobic nature of an escape room can add a fun layer of tension to an otherwise straightforward puzzle. Even so, there are a few board games that can replicate that feeling in your very own home. Escape from the Museum takes all the fun and intrigue of a museum-themed escape room and crams it all into one expertly crafted game.

If you’re a fan of the puzzle-solving aspect of escape rooms, you’ll appreciate Escape from the Museum, one of the latest releases in the Professor Puzzle escape room lineup. It features a fun “night at the museum” type of setup that includes plenty of brain-busting puzzles and ancient stone tablets to decode. With a cool setting and challenging puzzles, Escape from the Museum certainly stands up to its predecessors.

Escape From the Museum Gameplay

Escape from the Museum is a mini, collaborative escape room experience meant to be enjoyed with friends and family just as you would enjoy a real escape room. In this version of the game, your ordinary trip to the museum gets turned upside down when you mistakenly end up locked inside the museum after hours. With no one around in the dark, quiet museum, it’s up to you and your companions to find the necessary means to escape.

Throughout Escape from the Museum you’ll search for the key to unlock the doors, which is hidden away somewhere inside the museum. The only clue to the location of the key is a note written in a cryptic alphabet, which you’ll have to use your tools and wits to decode. Once you’ve solved all of the puzzles, you can find the hidden key and leave the museum behind for good!

The Escape from the Museum box comes with 12 puzzles, museum papers and artefacts, a pencil, and instructions for playing the game. It also comes with solutions, which you can look at if you get stuck and you need some guidance with one or more of the puzzles. You’ll have to solve puzzles such as the Zodiac in Art exhibit or the Horticultural Garden’s maze to find clues to translate the ancient letters on the mysterious note.

Other Games In the Escape Series

Professor Puzzle has released a few more escape room games in their escape series, including the 90s-themed Escape from the Mall. This fun game includes four different challenges to complete in order to make it out without any food court freak-outs or dressing room disasters. It’s a shorter game than Escape from the Museum, but its fun teenager theme will be a blast for the past for many adults.

Find the Key To Freedom and Escape From the Museum

Escape from the Museum is playable by any number of players, although it’s usually best for between 2-8 players to get the most fun out of the game. However, it can even be enjhoyed alone if you prefer a single-person game! Gameplay lasts around 45 minutes, which makes it a fun inclusion for an after-dinner game or as part of a larger game night. It’s suitable for ages 12 and up, as the puzzles are more suited for older kids and adults to solve.

Put on your thinking cap and buy Escape from the Museum today!