The Fantasy World of Everdell 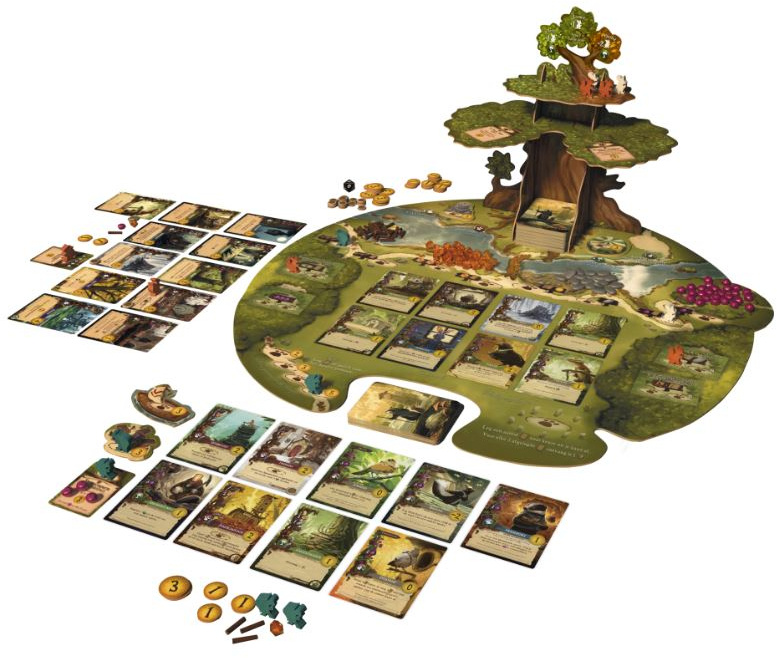 Everdell is an city-building fantasy game. This worker placement board game for 1 to 4 players, ages 12+, takes 50–60 minutes to play. “Everdell” was conceived by an international team of game designers and artists from Europe and America.

The Basics of a Fantasy World

The fantasy world of Everdell is inhabited by all manner of fantastical creatures (We like that word… It’s Fantastic!). There are squirrels and badgers and chipmunks, foxes and rabbits and mice; there are elk and sparrows, robins and blue jays—and the list goes on.

It seems that every creature has its place in this land’s bustling ecosystem. From their forest home, these furry friends live quite comfortable lives: they eat nuts and berries (and often each other) for food, shelter from the elements in the hollows of ancient trees, sticks for stoking fires…the finer things in life really. One might be tempted to think everyone here leads a peaceful existence. However! Things have changed in recent seasons.

There’s something new in the forest now—a bustling city that could prove to be either a blessing or a curse for these woodland creatures, depending on who you ask. It is up to you and your furry friends to settle this wild frontier, building cities of your own while competing with other players for the best plots of land, favorable trade agreements… and enough food to stave off starvation!

“Everdell” offers several distinct play modes: solo, cooperative, competitive, team-based. Of course there are many ways to enjoy “Everdell”. The game can be played mainly as a worker placement game (1–4 players) where the goal is gaining points by completing goals or fulfilling orders; but there is also a resource management mode (1–4 players) where the goal is to gather as many resources as possible and outlast other players; finally, there is a fully cooperative or solo mode (1 player) where players try to complete different objectives that come with the game.

There are 3 rounds in each “Everdell” match: Spring, Summer and Fall. During these rounds, you can take actions by placing one worker at a time on an action space on the board. There are three types of workers: red workers can be placed on building spaces; blue workers can be placed on event spaces; green workers can be placed on resource spaces (to gather food). Alternatively, if your was already used this round you can choose to instead take one star (points) by placing your worker on the star space. Once all workers have been placed, you must resolve all active events before moving onto the next round.

The game ends immediately after the final event of fall has been resolved and points are counted. The player with the most points wins; if there is a tie, then players play in sudden death mode for 1 additional turn and whoever scores the highest total number of stars takes the win!

Each of the five card types yield six different actions. Those actions include resource generation (wood, stone, sap), worker placement, collecting resources, gaining points/stars, taking special abilities/events/cards or additional action spaces. There is also a reference sheet on each player’s mat with all possible actions and their costs. Many times players may never want to gather exactly what they need to complete an action due to future plans towards other game objectives; this means that it is ok for them to overspend in order to gain more than enough of any one type of resource.

Create a fantasy world with your family and friends and purchase Everdell today!