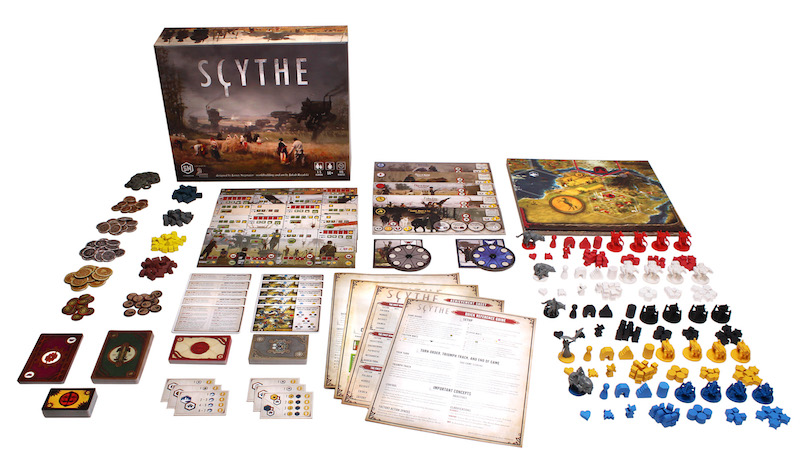 Scythe is a miniatures board game set in an alternate history of Eastern Europe that combines mechanics from engine-building games like Brass and worker placement like Lords of Waterdeep. The combination of these elements allows for Scythe to play out as a kind of hybrid between the two genres, giving it more depth than your typical engine-builder while still keeping the pacing brisk enough to make the game enjoyable.

Scythe uses miniatures to represent units in combat – minis can be upgraded and used over and over again, allowing for battles to take place (with the possible addition of cards) between miniatures on the board. This adds a miniatures game element to Scythe that is highly anime-inspired, but minis are typically used in miniatures games to represent armies rather than individual soldiers themselves – minis are not merely for combat purposes here.

Combat is handled through miniatures in this game, so there’s something decidedly anime-inspired about Scythe. However, miniatures games are typically done with the miniatures representing heroes or armies rather than being representative of soldiers themselves. I’m not sure if that means it’s more like Legend of the Five Rings meets Axis & Allies, but it seems fitting. The miniatures themselves are beautiful and detailed, which makes combat fun as you watch each miniature do its thing.

In Scythe, players begin the game with a faction board that has three mech miniatures on it – one for a worker, a soldier, and a noble. Each player takes turns placing their minis onto various locations on the board. These miniatures represent individual units, but instead of being used to simply fight battles or lay claim to territory, minis are also used to execute various actions throughout the game. For example, at the beginning of the game each player takes one minis from their faction board and places it onto an action space that allows them to build buildings – miniatures are also used to upgrade minis, move minis through territories you control (more minis = more territory), or to take resources.

Mechanics in Scythe revolve around miniatures and minis in a few ways: miniatures represent units that can be placed on the board in order to take actions, minis are used for combat purposes, minis are upgraded throughout play, minis cycle in and out of play each round.

At the beginning of each game, each player receives a player board that has spaces for miniatures on it, but also several other actions which can be taken throughout the duration of play. These actions are broken up into four categories: managing energy, building structures, playing cards/upgrading miniatures/fighting battles. All these actions require the use of miniatures to take place, so it may be necessary to refocus on minis throughout the game in order to accomplish certain things even when it’s not your turn.