Get In with the “Out” Crowd: Geek Out! 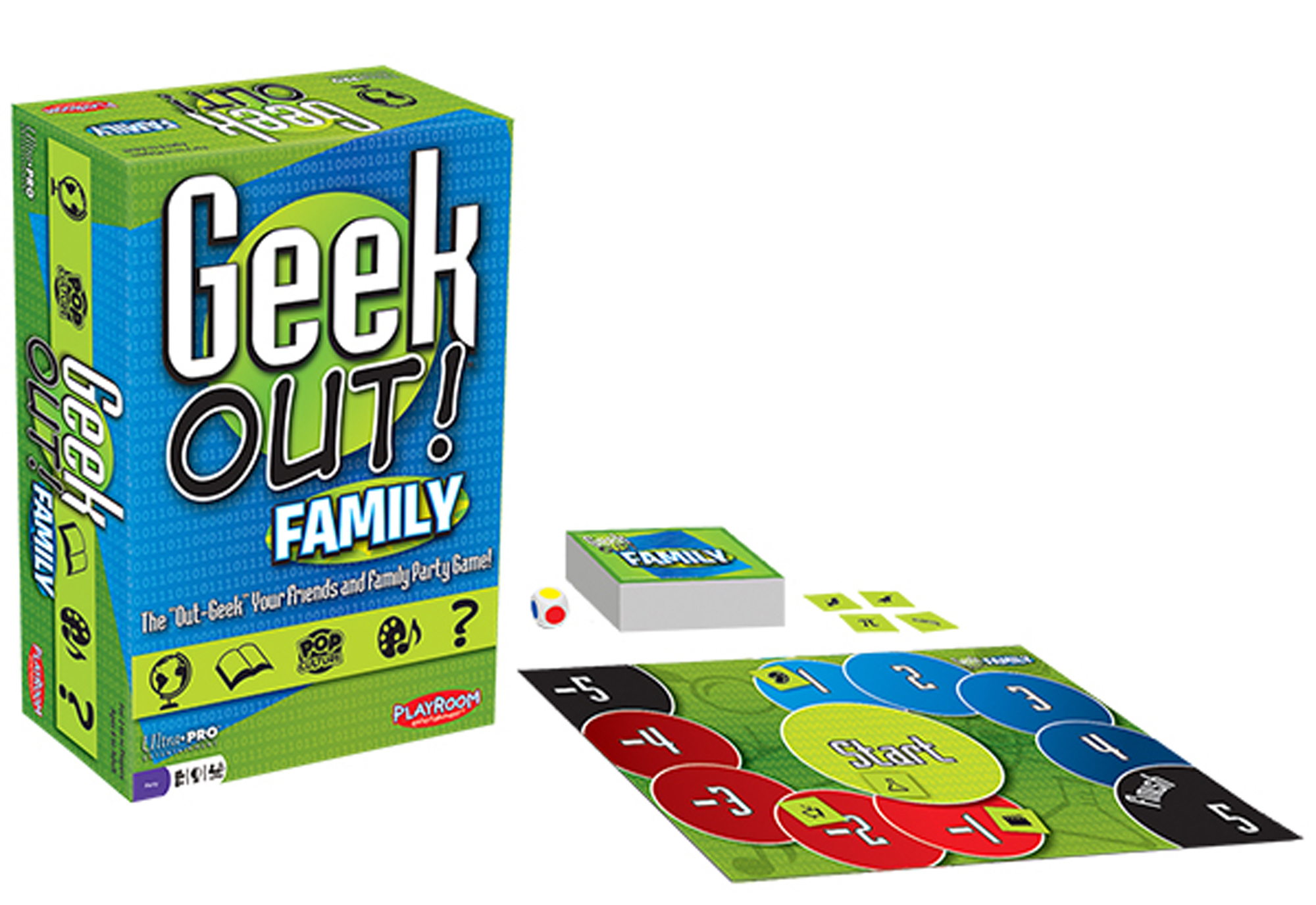 Geek Out! is a party game that can determine once and for all which player is the most knowledgeable about your favorite pop culture subjects.

You draw cards asking you to list a certain number of things that fall under a certain category: comic books, fantasy, games, science fiction, and miscellaneous. Before you begin however the other players may try to steal your points (and bragging rights!) by bidding to list even more than the card requires. The bidding continues until one player is ready to “out-geek” their friends. Collect a predetermined number of cards and you win!

There are many ways Geek Out! helps add to the party atmosphere: it’s fast, fun, and easy to learn for casual gamers of all levels; Geek Out! can be played competitively or cooperatively with friends; Geek Out!’s unique play style makes it a great ice breaker with new acquaintances; Geek Out! is, most importantly, perfect for those nights when you can’t decide what to do. Geek Out! will be the highlight of your part and even start some lively debates amongst friends.

Geek Out is so much fun and everyone I know loves playing games like this on game night.

It’s a great way to get everyone together and have a laugh. The Trivia cards are always fun, but I really love the “miscellaneous” category as it allows for some hilarious answers from my friends. Sometimes you just can’t beat those nights full of laughter!

What Makes a Great Trivia Game?

Trivia games are a great way to build friendships and bring people together. Trivia games can be the perfect addition to parties, game nights, or casual get-togethers. They are fun no matter who you play with!

I don’t think there is anything better than playing trivia at home with my friends on our own personal game night. It’s something everyone loves doing when they’re not working hard all week long. Trivia has always been one of my favorite things to do because it brings out so much laughter in any situation – especially during those stressful moments where we could use some laughs!

A good trivia game will always impress your guests and family members alike by bringing them together over their shared interests. Trivia games are also great icebreakers when you have friends or family over, and they make for a fun way to bond with the people closest in your life. Trivia games can be played competitively or cooperatively depending on what everyone is looking for – it’s nice to know there are options out there! Trivia games can also help determine once and for all who really knows their stuff about one certain thing that interests you- talk about bragging rights! Trivial Pursuit has always been an old reliable classic game but I’m excited to try this new trivia game called Geek Out because it seems like something different compared to other board/card games.

The Value of Trivia Games for a Game Night

Trivia games are a great way to spend time with friends and family as well as bond over your shared interests. Trivia games can be fun whether you’re playing competitively or cooperatively! Trivia games also make for a fantastic ice breaker when meeting new people because it gives everyone something in common that they love to discuss. Trivial Pursuit is an old reliable classic trivia game, but I’m excited about testing out Geek Out- this one seems like it’s going to bring some laughs too!

Sometimes we need those nights where there isn’t anything else happening besides hanging out with our closest friends and family. Trivia games are a great way to bring everyone together and have some fun “geeking out”. Trivia games especially make for an awesome ice breaker when you’re meeting new people because it helps get the conversation going somewhere other than awkward silence!

Let’s be honest- trivia night is always more fun with friends By playing Geek Out, my family gets unique insight into each of our interests in geek culture such as video gaming, comics & superheroes, anime/manga, or just Star Wars… It’s so much fun that we even had all the adults play against the kids at our last game night party and let me tell ya: they did not stand a chance! That was probably one of my favorite things I’ve done yet this year.

Geek Out Trivia Game: Get in with the Out Crowd

Trivia games like Geek Out are a great way to bring everyone together and bond over your shared interests. Trivia nights especially make for an awesome ice breaker when meeting new people because it helps get the conversation going around something that you all love! It’s also super fun to play against each other (even adults vs kids) at game night parties like I did recently- they didn’t stand a chance against me 😉

Do You Plan on Testing out Geek Out With Your Friends? Let Us Know what You Think About Trivial Pursuit Games in the Comments Below! Can’t wait to read them… And of course, don’t forget about sharing this post if you know someone who would love this game!

So, if you’re interested in Trivia games, or just a good laugh, check out Geek Out! and buy it today!