Spot It!: The Family Game of Matching 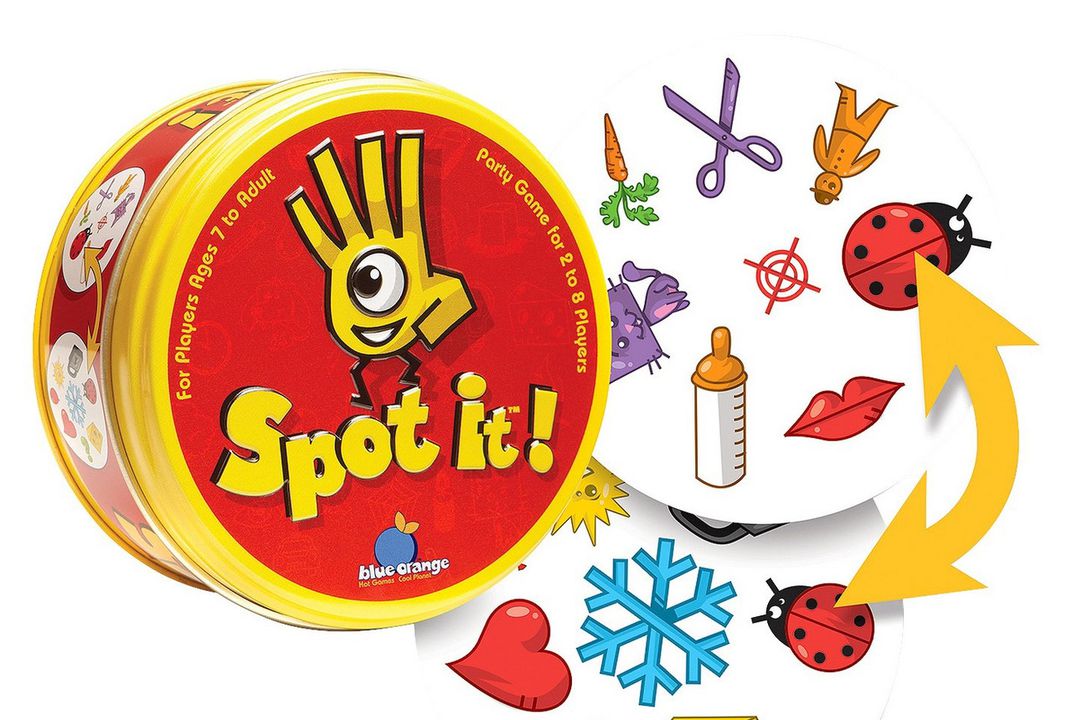 Spot It! has 55 circular cards each of which contains eight symbols varying by shape and color. One card will contain all the symbols matching in either shape or color (or both), while the other card will show something different; this is what you are matching.

Spot It! requires speed, observation skills, and pattern recognition to find matches between pairs of cards as quickly as possible and get rid of your hand before everyone else. The winner is the player who gets rid of their cards first and has collected the fewest cards at that point; ties go to the player with more sets.

This card game was created in 2008 by Blue Orange Games, an American game publisher that offers an array of card games, board games, puzzle toys, and party games. The game was the winner of Dr. Toy’s 10 Best Active Play Games Award in 2011, among many other awards.

Spot It! has also earned the Specialty Retailers’ 2012 Game Of The Year Award as well as multiple Teachers’ Choice Awards for its educational value.

Some card games may last up to 30 minutes or so but Spot it! can be finished much faster than that since each hand usually lasts only a few minutes. This card game is perfect for a family night where everyone will have fun matching symbols while competing against one another at the same time!

The Many Versions of Spot It!

Spot It! comes in several versions, including Holiday Spot it!, Disney Princess, Frozen Fever, Halloween, and Harry Potter. Disney Spot it! also comes in a Disney Villains version, and Frozen Fever has a second version with alternate symbols to play the game with.

Holiday Spot it! was the first expansion to this card game, released in 2012. This version features Christmas-related symbols such as Santa Claus, wreaths, Christmas trees, and candy canes.

Disney Princess Spot It! was released in 2013 as part of the Spot it! Challenge expansions. It includes various princesses from Disney movies such as Pocahontas and Rapunzel as well as other characters like Belle and Tiana. The symbols used on cards are different than those found in Holiday Spot it! and each card contains two character images instead of one.

The Harry Potter expansions were also expansions to the Spot it! Challenge expansions and was released in September 2016 along with Disney Villains. The symbols used on cards are different than those found in Holiday Spot it!, Disney Princess, and Frozen Fever; each card contains two images instead of one just like all other expansions/variations of this game. There are five sets: “Heroes,” “Alumni,” “Romance,” “Action Shots,” and “Magical Places.”

The expansions mentioned above are not the only expansions to Spot it! This card game comes in various expansions you can add on or purchase separately from one another. These expansions as include Marvel Super Heroes, Star Wars Ep. 1-6, and many more.

Family Game Night With Spot It!

Spot It! will make a fantastic addition to any family game night. It is perfect for ages 7 and up. Compete as a family, and play as a family.

With Spot it!, you’ll enjoy seeing the happy expressions on family member’s faces as everyone works together at finding matching symbols before time runs out! Matching cards is both fun and educational for kids (and adults)!

So what are you waiting for? Prepare your family game night, and get ready to play Spot It! Buy Spot It! from Fantastic Games today.