Sequence: Finding New Ways to Connect with Friends and Family 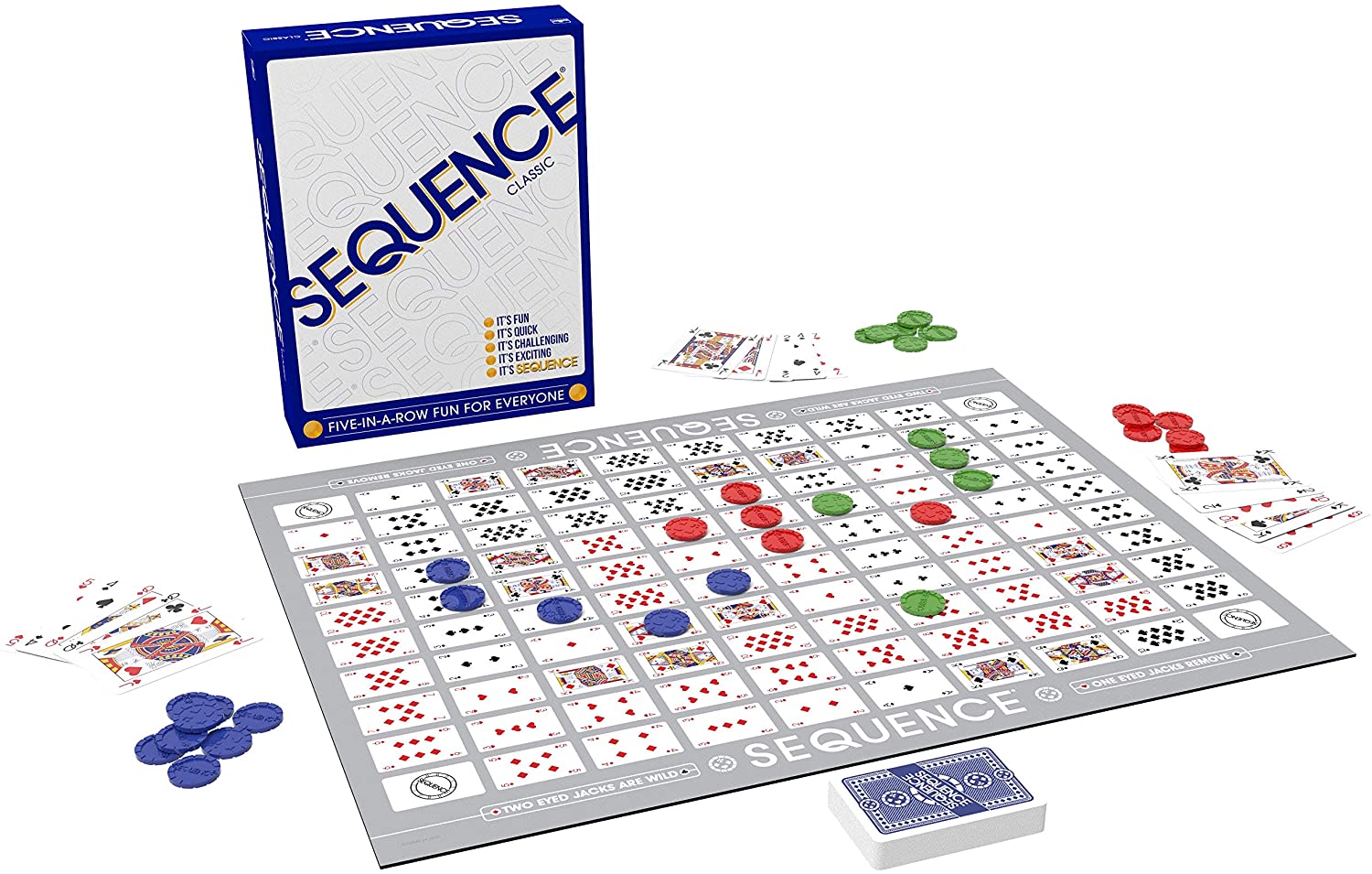 As human beings, it’s in our brain chemistry to try and make connections out of the things we see. We can see connections almost anywhere, from the clouds in the sky to the cracks in the sidewalk. Sequence is a fun and simple board game that takes this innate desire to find connections and turns it into your greatest asset.

Sequence is similar to Connect 4 in its use of checkers to try and make rows or columns before the other players. However, this board game goes above and beyond with added complexity and greater opportunity for luck. You’ll have to have the perfect blend of luck and strategy if you want to stop your opponents from building their sequence while forging a sequence of your very own.

Sequence is a board and card game that forces you to find connections between the different playing cards all printed out on a large game board. The game board comes with two decks of 52 cards printed out in a 10 x 10 formation, with the four corners acting as free spaces for any player to use. The board game also comes with checkers that you use to mark your cards and make your connections.

The goal of Sequence is to make a connection of five different cards using your checkers. Players can create a sequence of five cards in a row, a column, or a diagonal. However, at the same time as you’re trying to create your own sequence, your opponent is trying to create theirs. You’ll have to work around their moves if you want to create an uninterrupted sequence and win the game.

On each turn of Sequence, you get to play a card and then draw a card. The card you play allows you to place one of your checkers on the board wherever that card is located. Since there are two of each card on the board, this gives you a couple of options of where you can place your checker each round.

The two-eyed Jack is a wild card, allowing you to place a checker anywhere. And while you normally can’t remove a checker once it’s been placed on the board, the one-eyed Jack is a special card that allows you to remove one of your opponents’ checkers. You just might find yourself one checker away from winning the game only to be dealt a bone-crushing one-eyed Jack at just the wrong time!

Sequence has a couple of different spinoff versions that switch up elements of the game and add fun new themes. Sequence States & Capitals gets rid of the normal playing cards in favor of the 50 states of the US and their capitals. You’ll have to match your state card to the correct state, shape, and color on the board. It’s an excellent way to teach kids about their states and capitals (and give adults a brush-up).

There’s also a version of Sequence called Sequence Dice that swaps out the cards for a pair of dice. This spinoff dice game has the same goal as the original Sequence, but it uses a board with four interlocking arrangements of the numbers 1-9. If you roll snake eyes or double sixes, you’re allowed to roll again, giving you a potential way to fast-track your win and beat out the competition.

Make the Connection with Sequence

Sequence is playable by 2-12 players, making it a perfect game for parties or family gatherings of almost any size. It’s suitable for ages 7 and up, so kids and adults can battle it out as they race to try and make the connections. Playing time lasts around 10-30 minutes, but it’s an infinitely replayable game that’ll make you sure to want to play a second round.

One of the best things about Sequence is that it’s incredibly affordable and can be found pretty much anywhere, from your local thrift shop to an online retailer. This game offers plenty of replayability, as you won’t easily tire of the fast-paced game mechanics and opportunity for messing up your opponents. Buy Sequence today and enjoy the simple pleasure of connecting the dots!