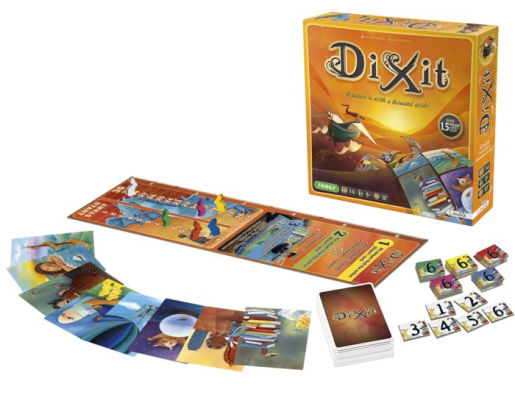 If surrealist art is your thing, then Dixit is the perfect party game for you. This fun and wacky game forces you to tap into your creative side to find the perfect clues for the images in front of you. Whether you’re the king of using your imagination or you’re more in touch with the logical side of your brain, Dixit is an incredibly fun card game that will bring out your playful side.

Dixit is an excellent party card game that can be played in several fun-filled rounds. Every player gets a hand of six cards, each of which includes a single abstract picture without any text. On every round, a different player is designated the Storyteller. The Storyteller is tasked with choosing one of their cards and giving a clue about it before placing it facedown on the table. The clue can be either a word or a sentence.

Once the clue has been given, the other players will each choose one of their own cards that best match that clue. They’ll then place that card facedown on the table along with the Storyteller’s card. The cards are shuffled and then revealed face up on the table for everyone to see. The goal of each player is to try and guess which card was in fact the Storyteller’s card.

One of the best parts of the card game Dixit is the fact that it comes with large, beautifully illustrated cards. These abstract illustrations include things like ticking timepieces, unicorns and rainbow bridges, a sea of umbrellas, and fearsome dragons. All of the cards in the game are family-friendly, so you can easily enjoy the game with little kids or teenagers.

Players can also earn points in the event that another player guesses their card instead of the Storyteller’s. Once all of the guesses have been made and the points have been tallied, the next person in the circle becomes the Storyteller and the game continues. The game ends either when all of the cards in the deck have been played or when a player earns 30 points. If all of the cards are played, then the player with the most points wins.

Points are scored with a game board that comes with little rabbit tokens. Players will move their tokens around a track at the bottom of the game box as they earn points, watching their bunnies inch closer and closer to victory.

Dixit comes with a couple of expansions and standalone games that take the simplicity of Dixit and expand it into something much more whimsical. Dixit: Journey allows your clue to take the form of a story, a song, or a movement that is associated with the card. Fortune favors the brave with this card game expansion, as you’ll have to put aside your stage fright and put on your dancing shoes to make your clue really stand out!

Dixit: Odyssey works as both a standalone game and expansion that features the same gameplay as the original Dixit in addition to 84 new cards. This expansion includes additional rabbit storing tokens, allowing up to 12 players to play.

Let the Art Do the Talking with Dixit

Dixit is playable by 3-6 players, so it’s a good party card game for small groups of people. However, if you forego the scoring board and simply keep track of the points manually, then you can accommodate more players. It’s also suitable for ages 8 and up, as it’s very family-friendly and easy to follow. Playing time lasts around 30 minutes, so you can easily fit in a round or two before dinner.