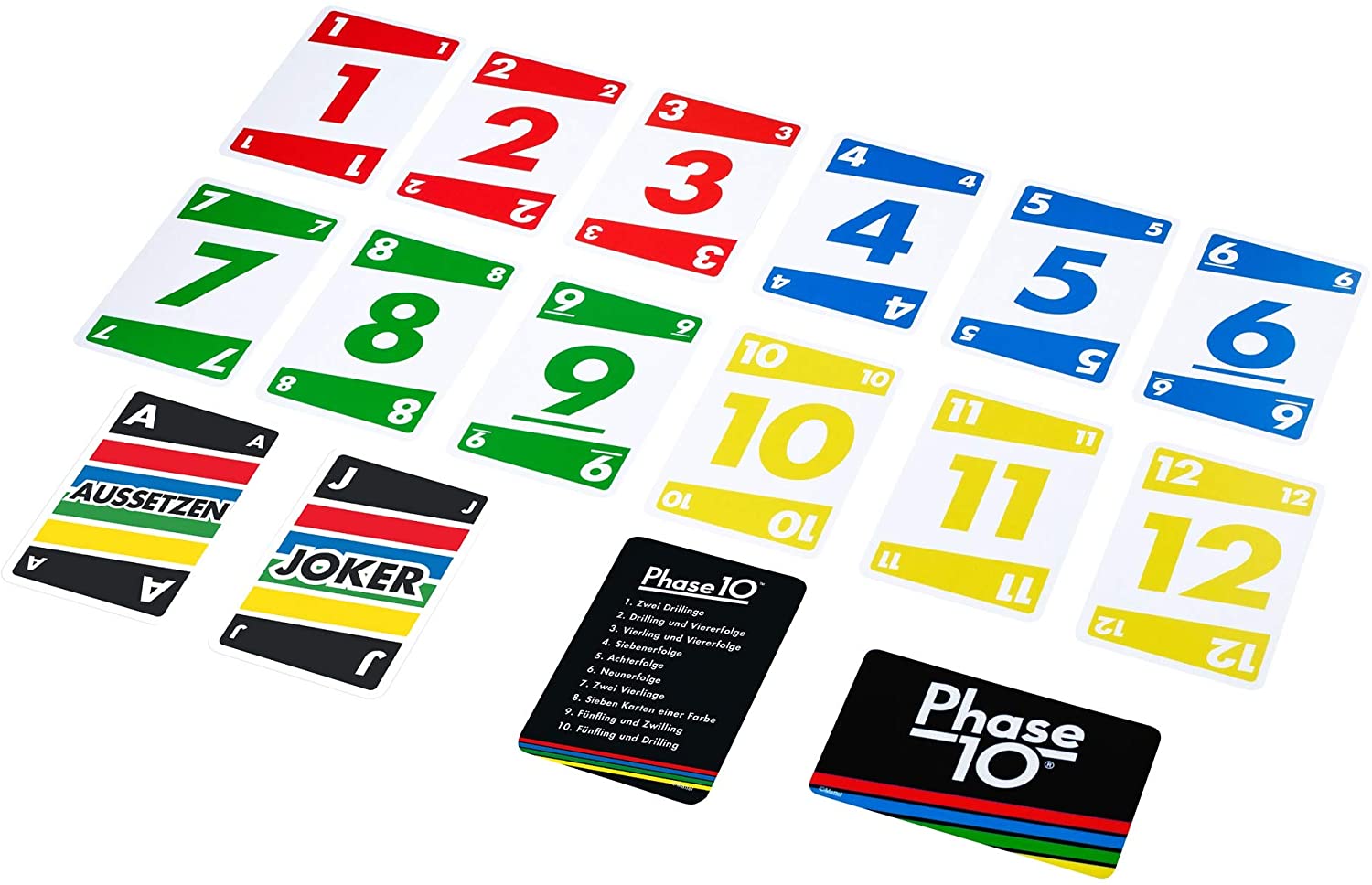 If Rummy and Uno had a baby, it would be Phase 10. This card game uses colorful numbered cards to force you to collect unique sets in a race against your opponents. It’s a fast-paced game that’ll keep you on your toes as you draw and discard cards while pondering your opponents’ next moves. If you’re looking for a fun alternative to Rummy that you can play on the go, then Phase 10 is the perfect card game for you.

Phase 10 is played in multiple rounds, with each round forcing you to collect a certain set of cards in order to advance. At the beginning of the first round, all of the players are in Phase 1. This requires you to collect two sets of three identical numbers. Players will go around in a circle drawing and discarding one card at a time.

Once a player completes the phase and discards their last card, the round ends. All the players who still have cards in their hands will receive a penalty to their score based on the number of cards they have left and their value. When the next round begins, all the players who collected the right cards to complete Phase 1 get to move onto Phase 2. Everyone else is forced to complete Phase 1 again.

Phase 10 continues for multiple rounds until one player manages to be the first to complete all 10 phases. The trick of the game comes from being able to know which cards to discard in order to quickly catch up and beat out the other players. While the rules are pretty simple, there is a little wiggle room for a strategy that can make this card game more complex than meets the eye.

There is another element of Phase 10 that makes it a bit more challenging: the special cards. These cards can really throw a wrench in the works by allowing you to skip over opposing players during their turn. You can also draw wild cards that can have any color or number that you choose, allowing you to complete your set.

One thing that can bog down Phase 10 is the length of the game time. If you play it according to the traditional rules, games can often last upwards of 2 hours. However, there is a common house rule that many people employ to speed things up and make the most use of the points system of the game.

By allowing everyone to advance to the next phase regardless of whether or not they manage to complete the set, then you can get to the finish line much faster. If you play Phase 10 using this house rule, then the player who has the best score by the end of the game is crowned the winner. This can incentivize you to complete your sets and win as many phases as possible.

Phase 10 Twist is a sequel to the original card game that adds some interesting twists to the original game. Instead of just using a deck of cards, Phase 10 Twist comes with a board with a phase track. This can be used to move players along and easily score the game without having to count the cards every time.

This sequel card game also includes Twist spots that force players to choose a different phase to complete than the one they originally were assigned. Players can choose from the optional Twist phases that are more difficult than the regular phases but offer more of a reward for completing. This card game also includes three discard piles, giving you an additional strategic element to consider when shedding cards.

Better Keep Up with Phase 10

Phase 10 is playable by 2-6 players, so it’s an easy card game to play on a family camping trip. It’s suitable for ages 8 and up, as it’s easy to comprehend and quick to pick up. Playing time lasts around 45 minutes to 2 hours, although it can be much shorter if you use the optional house rule.

Buy Phase 10 today and enjoy the lovechild of Rummy and Uno!