Checkers: The Game that Spawned a Million Tournaments 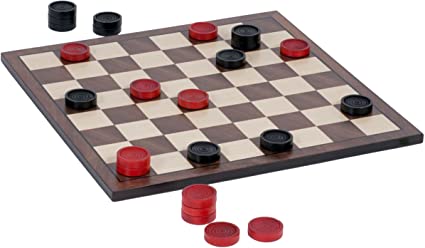 Checkers is arguably one of the most well known board games of all times.  It’s been featured in countless movies and has been the subject of millions of tournaments hosted by international checkers associations.  You can hardly go for a walk through the park without seeing a pair of players ruminating over a checkers board.  But this timeless board game has reached international notoriety for two reasons: its simple rules and its endless strategies.  Even two players who know nothing about each other can connect over the mind sport that is checkers!

Checkers is played by two opponents who start out on opposite sides of the board.  The board is set up with dark and light checkered spaces, while each player plays with either light or dark pieces.  Only the dark checkered spaces are used in the game as players move their pieces across the board in an attempt to capture their opponent’s pieces.  Players are allowed to move one piece per round, either moving the piece diagonally into an unoccupied space or capturing the other player’s piece.

To capture your opponent’s piece, you have to be able to jump diagonally over them.  You can’t jump over two pieces that are in a diagonal row, as there must be an empty space on the other side of the piece in order to make the jump.  However, you can jump over multiple pieces in one turn provided these are done in successive jumps.  Much of the fun of checkers comes with the zigzag moves where you sweep half the other player’s pieces off the board in one fell swoop (to their dismay).

The simple setup of checkers makes it a bit more accessible to younger players than chess, although there is one thing that makes checkers more than just a game of jumping jacks.  If either player manages to get one of their pieces all the way to the opposite side of the board, their piece becomes a king.  Not only does this mean you get to stack a second piece on top of the first, but you also gain the ability to move your piece backwards and even capture pieces backwards.

While American checkers takes place on an 8×8 game board, international draughts is played on a 10×10 board.  International draughts also allows kings to move more than one space at a time in one diagonal direction provided there are no pieces blocking the way.  Turkish draughts is unique in that it starts with the pieces placed one row forward, and also uses every space on the board instead of every other space.

Checkers has long been played in tournaments and championships ever since the World Championship was established in 1840.  These tournaments bring checkers players from all over the world to employ their own unique strategies to beat the competition.  Because checkers deals with abstract strategy, it can be as complicated or as easy as you want it to be.  Young kids will get just as much out of a game of checkers as the most advanced tournament player!

Checkers is a one-on-one game, so only two players can play it at a time.  However, if you have multiple checkers boards, you can easily play the game in rotating pairs to give everyone a chance to join in on the fun.  Playing time lasts around 30 minutes, so you have a decent amount of time to develop your winning strategy for capturing your opponent’s pieces.

Checkers is suitable for ages 6 and up, which makes it the perfect introductory game for kids.  With incredibly simple rules and endless possibilities, checkers is the kind of game you can play time and time again from childhood through old age.  There’s a reason it’s survived for hundreds of years, and chances are it will survive long after we’re gone.