Bears vs. Babies: Who Knew Babies Could Be So Vicious? 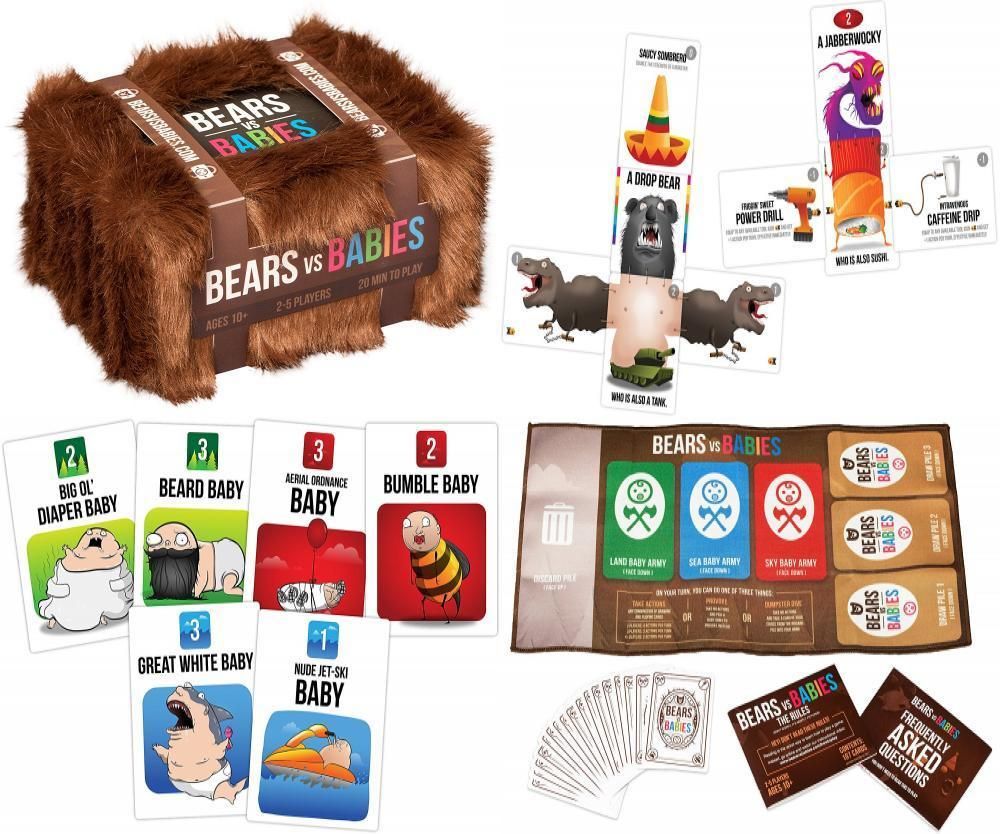 Ah, babies. Small, cute, and cuddly, what’s not to love?  Bears, on the other hand, are terrifying creatures that could tear you apart in a second. While this may be true in the real world, it’s anything but true in the world of Bears Vs. Babies. Bears vs. Babies flips the script by championing fierce and terrifying bears as the heroes of the tale while the evil babies are the villains.

One of the highlights of Bears Vs. Babies is the quirky and attractive art, drawn by Matthew Inman of The Oatmeal. With a silly setup and quick and easy rules, Bears vs. Babies is a game that’ll have you wincing every time you hear the cry of an infant.

Can we even use that term? We are going for it. Build a bear and love it!

Bears vs. Babies comes with 107 cards that you’ll shuffle and draw each round to build your patchwork bear and fend off the oncoming army of evil babies. The cards involve a mix of monster heads and body parts that you collect to build your magnificent bear. You can also collect hats, masks, and tools for your bear to wear or use in fighting the babies.

The deck includes several cards that can trigger the babies to attack, as well as the babies themselves. Players will go around picking cards to try and build their bear from various body parts, with each one giving you special abilities. You’ll have to make sure the stitches between the cards match, however, or else it won’t fit on your Frankenstein-like bear body.

Attack of the Babies

If you pull a baby card on your turn, then you’ll put the baby in the middle of the field. Baby cards will have a point value from zero to three on them, as will your monster cards. These numbers correspond to the strength of your bear warriors and evil baby villains during the upcoming war. When the babies attack, they attack all the players, and it’s every man for himself.

If your bear is stronger than the baby, then you’ll win the fight! And if your bear has a higher number of points than your competitors, then you also get to keep the baby cards. However, if the baby army is stronger than you, then your bear gets sent straight to the discard pile. Because you can provoke the baby army to attack during your turn, this may be a good way to earn points while eliminating one of your competitors with a surprise attack.

You are also given the opportunity to search the discard pile for cards on your round, which can be helpful in nabbing the right component to complete your freakish creation. The game will then end once all of the cards have been drawn, with each of the players tallying the points from the baby cards they defeated.

Bears Vs. Babies has an NSFW expansion pack available that can be integrated with the original game. While the original game is suitable for ages 7 and up, the expansion back is most definitely not family-friendly. This includes 30 NSFW cards to add some raunchy humor to the game as well as a condom to help protect against those evil babies.

It’s All Out War with Bears vs. Babies

Bears Vs. Babies is playable by 2-5 players, so it’s a good game for couples, friends, and small families to play together. It’s also suitable for ages 7 and up, so little kids can join in on the fun without getting confused. Bears vs. Babies has a playing time of between 15-20 minutes, which allows you to play multiple rounds or just stick with one as an icebreaker.

Bears Vs. Babies is a great game for non-gamers or younger players who aren’t really capable of grasping the complicated mechanics of more advanced card games. In fact, the manual specifically asks players not to read it, but to watch a quick online tutorial and only use it for reference. Bears vs. Babies is an easy and fun way to fill 15 minutes before dinner or to get to know people at a party.

Buy Bears vs. Babies today and let your silly side win out!