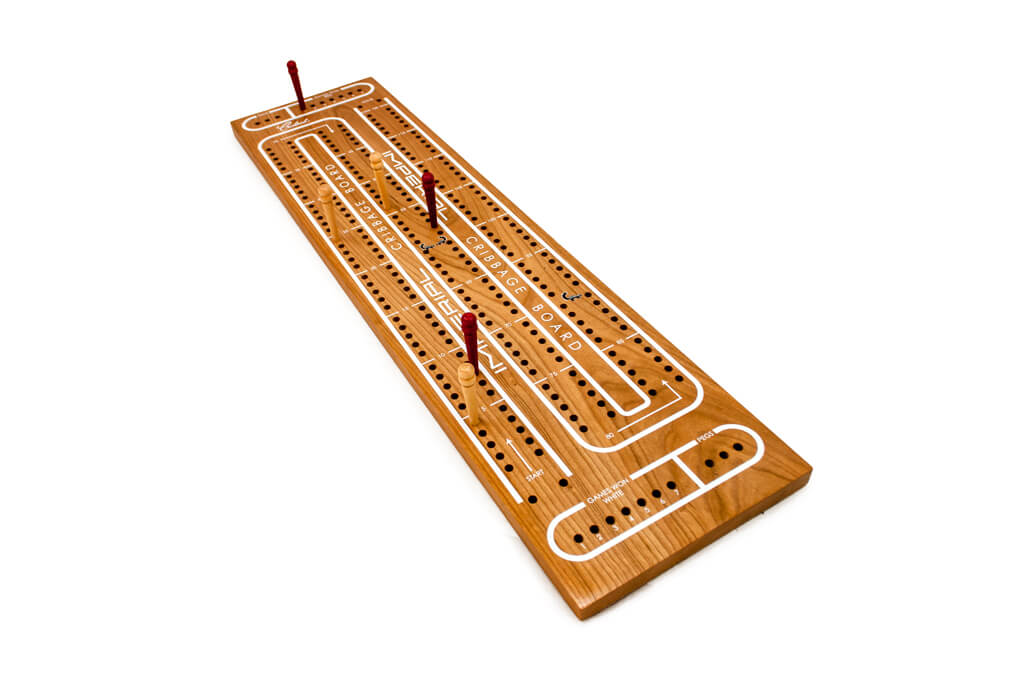 Cribbage is a card game that was invented almost four hundred years ago, but its classic wooden cribbage board is still spotted in countless cafés and parks across the world. Part of the charm of Cribbage comes from its quaint vocabulary describing all of the different moves you can make, such as “one for his nobs” and getting “stuck in the stink hole.” You’ll be sure to love watching the little pegs move along the board as you rack up points and get closer and closer to winning the game.

Cribbage is played with a deck of standard playing cards as well as what’s called a cribbage board. Each player gets dealt a hand of six cards, two of which they then discard into a pile in the center of the table called a Crib. Players will then cut one card from the draw pile and turn it face up in between them. This card counts both as part of each player’s hand as well as the Crib.

Players will then go back and forth playing cards to try to make sets and sequences and earn points. Because you don’t know what the turn-up card will be until you’ve already discarded two of your cards to the Crib, you may find yourself parting with cards that you wish you’d held onto.Cribbage is very much a game of cat and mouse, as you’ll have to keep an eye on the cards you think your opponent has if you want a chance of setting a trap for them.

Players will keep score of their points by moving pegs along tracks on their cribbage board. Each round goes until both players have used their entire hand of cards. At the end of each round, players will pick up their hand and figure out each scoring combination they can use. Whichever player is designated the dealer that round also gets to use the cards in the Crib to help them earn additional points.

The winner of Cribbage is whichever player is the first to win 121 points. This can influence your decisions each round as to how long you decide to let the round go on for. For example, if you can tell the other player is racking up some serious points, you may want to play the hand tight in order to keep both of your overall scores low.

The cribbage board is one of the most unique elements of the game, as it adds a fun aesthetic component to it. Sure, you could just as easily score the game with a pencil and a sheet of paper, but a cribbage board imbues the card game with a sense of beauty. Moving the little pegs along the board is incredibly satisfying as you see yourself visually take the lead from your opponent.

There are a couple of spinoffs and expansions of Cribbage that make the card game even more complex. Wild: Cribbage Expansion adds a deck of 31 playing cards to the original game that you set beside the crib board. Whenever a player counts a multiple of five, they then get to draw a wild card and follow its instructions. This can lead you to do things re-cut the deck or land you in the stink hole.

Peg Your Points and Don’t Forget the Crib With Cribbage

Cribbage is playable by 2-4 players, although it’s typically best suited as a 2-person game. It’s suitable for ages 10 and up, as its mechanics are not too complicated for younger players to learn. Playing time lasts around 30 minutes, so it’s the perfect game to play for fun at a coffee shop or in the park.

Dive into the fun of this classic card game and buy Cribbage today!