Go: A Game As Old As Time 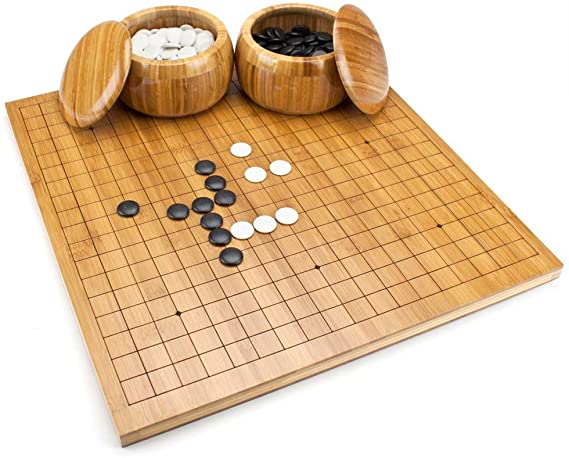 Chances are you’ve seen people playing a game of Go in the park or on TV, maneuvering around little black and white stones on a large wooden board. While Go may be one of the simplest games to learn, it offers countless opportunities for developing strategies and tactics to beat your partner and steal their territory out from underneath them. Go gives you the ability to develop your own unique style, providing you with countless of hours of mindbending fun.

The History of Go

Go is one of the oldest board games in history, but its simple rules belay an endless amount of depth. Go was first mentioned in the Analects of Confucious in around 500 BC, while the earliest physical evidence of the board game was a Go board discovered in 1952 in the tomb of the Han Dynasty, which lasted from 206 BC to 9 AD.

There are many urban legends and scholarly anecdotes about the origins of Go, the most popular of which is that it was invented by either Chinese emperors, court astrologers, or an imperial vassal. Many claim that Go was invented by Emperor Yao to amuse his son, while others claim that Emperor Shun created the game to make his son smarter. No matter who invented Go, its popularity and endurance have certainly been well established.

Because Go has been around for so long, there are plenty of different variants of the game that come with all sorts of different rules. However, the standard game is usually the same. It starts with an empty board, which is a 17×17 grid. Each player is given a bunch of stones to use, with one player using black stones and the other using white.

The goal of the game is to use your stones to form territories by blocking off empty spaces on the board. Players will take turns placing one stone at a time on the intersections of the lines. Once you’ve placed a stone, you can’t move it. However, you can surround your opponent’s stones and capture them, which allows you to take them prisoner.

The game ends once the board has been filled or when both players agree to end it. At the end of the game, players will tally up the points by collecting one point for every empty space within their territory and one point for each of their opponent’s stones they’ve captured. Like the game of chess, Go requires you to think many steps ahead to anticipate your opponent’s strategy and thwart their plans before they can succeed.

Go has many different variants that differ in areas such as the scoring method and the placement of handicaps. Tibetan Go begins with six stones from both colors placed on the third line within the grid. The Korean form of Go (called Sunjung baduk) begins with eight stones of each color laid out on the grid in a specific pattern, while Capture Go simplifies the game by declaring the first person to capture a stone the winner.

There’s even a variant of Go called Joker Go that uses a special deck of cards to spice things up. Each player is given a deck of 27 cards that show a unique configuration of stones. Players can then either play a stone normally or draw and play a card, which allows them to place the stones as shown on the card. This can throw a wrench in your plans or your opponent’s plans by reshaping the board in a dramatic way.

Go is the ultimate 2-person game, as it’s very much a one-on-one game of getting into your opponent’s head. It’s suitable for ages 8 and up, as it has incredibly simple rules that can be understood by any player regardless of their level of skill. Playing time lasts around 30 minutes, although the game has been known to go on for up to three hours depending on the skill of the players.

Go is an excellent abstract strategy game if you’re looking for something to stimulate your mind. Buy Go today and enjoy the limitless fun of this ancient game!