Five Crowns: The Game Isn’t Over ‘Til The Kings Go Wild! 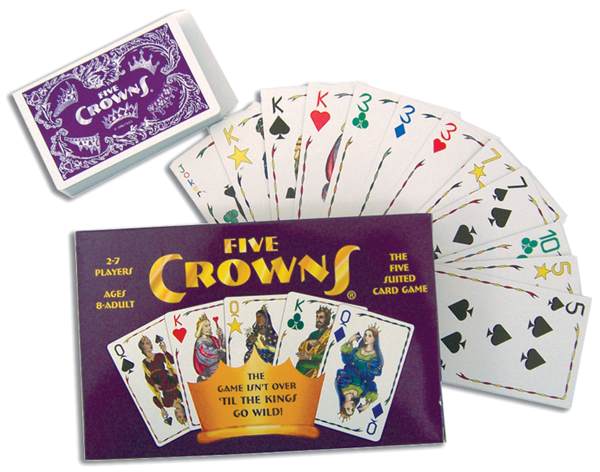 Most card games involve your standard deck of playing cards, but that’s not enough for Five Crowns. This card game goes one step further by adding a fifth suit, throwing even more chaos into the clash of the royals. Five Crowns is played similar to the card game Rummy, although it’s a lot simpler and comes with beautifully designed cards. If you’re looking for a card game that’s fun for the whole family, then Five Crowns is the game for you.

Throughout each hand, players will draw and discard one card at a time in order to try to make their meld. Once a player has successfully made a meld, the rest of the players have one final turn before the hand ends. Any cards that don’t get used to make a meld work against you, earning you points based on the face value of the card. Whichever player has the lowest score after the end of the eleventh hand wins the overall game.

One of the twists of Five Crowns is that it comes with a number of wild cards that can help you make your meld. There are two joker cards that can be used however you please in any round. In addition to these joker cards, each round has a different wild card based on the number of cards you hold in your deck during the round. So, for example, the first round requires three cards in a meld, which means that threes are wild.

Another thing that sets Five Crowns apart from Rummy is that Five Crowns comes with an additional fifth suit, which is stars. There’s also no ace or deuce in the deck like you’d find in a normal deck of cards. The beautiful illustration of the cards is definitely one of the most alluring aspects of the game, as they go above and beyond a simple deck of cards you would use to play a game like Rummy.

Five Crowns Mini Round also simplifies the game by using fewer cards, although its biggest trait is the fact that it comes with tiny cards in a little tin. This makes the card game easy to travel with and play on the go.

Five Crowns: Rummy with a Twist

Five Crowns is playable by 1-7 players, so it’s just as good to play on your own as it is for the whole family. This card game is suitable for ages 8 and up, which makes it a good game to use to teach younger players how to collect sets and manage their hands. Playing time lasts around 30 minutes, so you can easily play a game or two on a weeknight or before dinner.

Five Crowns is perfect for fans of Rummy who are looking for something a bit simpler for the kids. Buy Five Crowns today and join the clash of the kings!