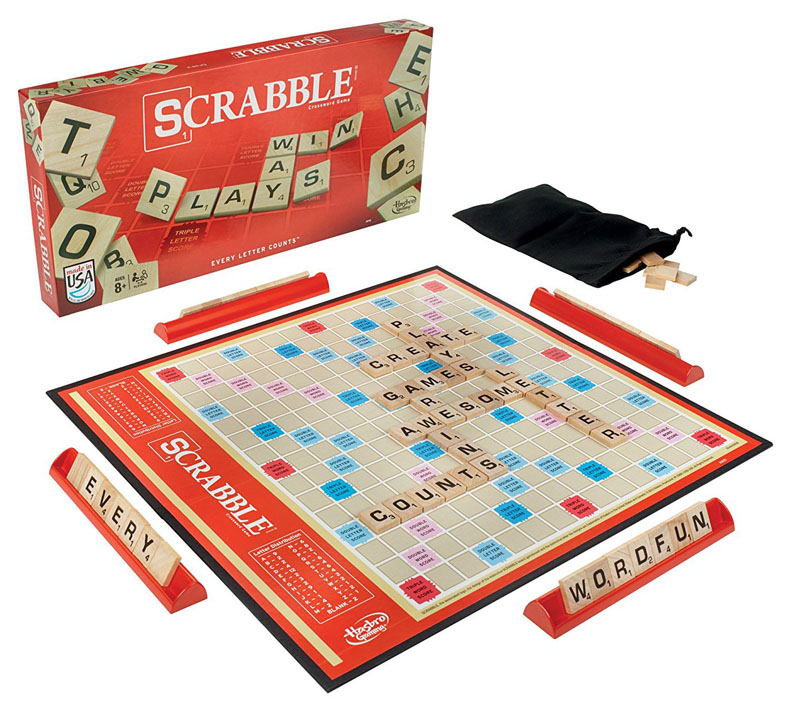 Scrabble is one of those board games that you just have to own. Whether you’re an English major who’s about to publish your second novel or you’re someone who hasn’t cracked open a book since high school, you’ll love the classic wordplay that comes with Scrabble. With countless online variations of the game, Scrabble has cemented itself in history as a board game that challenges the mind and will have you reaching for the dictionary.

Scrabble is played with a checkered game board and little wooden tiles with letters from A – Z. Players draw seven wooden tiles at random from the bag, taking turns by using these tiles to lay down words on the board. In order to determine which player goes first, players will have to each draw a tile at random from the bag. Whoever gets the tile closest to the beginning of the alphabet gets to begin.

In order to earn points in Scrabble, you’ll add up the number of points of each tile you play. Each letter has a certain number of points that you earn when you play it, which usually get higher the more difficult the letter. For example, the ubiquitous E will earn you only one point, while the quixotic Q gets you a whopping 10 points.

There are also different numbers of each tile in the bag based on how frequently the letter appears in language. You’ll find eight tiles of common vowels such as O, six tiles of consonants like R, but only 1 of the elusive Q. While you may want to collect common letters in order to boost your chances of spelling words with many letters, collecting the more challenging tiles may ultimately earn you a higher score.

The key to winning this board game is being able to navigate collecting special bonuses on the board while denying your opponents the opportunity to do the same. The board is set up with individual squares that contain special bonuses such as double word score, triple letter score, and even the rare triple word score. You’ll want to lay down words that make the most of these tiles without setting your opponents up to do the same.

For example, you may find that you can earn a nifty 15 points by spelling out a certain word that uses the double letter space. However, this would leave the next player to then take advantage of the double word space nearby, which would likely blow your score out of the water. Although you can’t see your opponents’ tiles, it pays to keep an eye out on the board to prepare for anything.

Players will pull tiles from the bag to replenish their hand back to seven tiles after each time they play a word. The game ends once all of the tiles have been drawn and the last player plays all seven tiles. Beware of holding on to high-point tiles, however, as any tiles left over in your hand by the end of the game will be deducted from your overall score.

The basic game of Scrabble is a staple of countless households throughout the world, but there are a few expansions and variations of the board game that switch up the rules. Scrabblers is a board game that comes with double and triple letter tiles that you use to form words. This means that, in addition to single letter tiles, you’ll be using combinations like “BL” or “STE” to make even longer words.

This expansion board game can be used on its own or with the original Scrabble board game. It comes with six different ways to play the game, including a Solitaire mode that can be played alone and a Boardless Crossword mode.

Scrabble is playable by 2-4 players, so it’s best for small groups or families. It’s suitable for ages 10 and up, so kids can definitely join in on the fun. Playing time lasts around 90 minutes, although it can be shorter if you put a time limit on turns.

Buy Scrabble today and enjoy the mind-bending fun of wordplay!