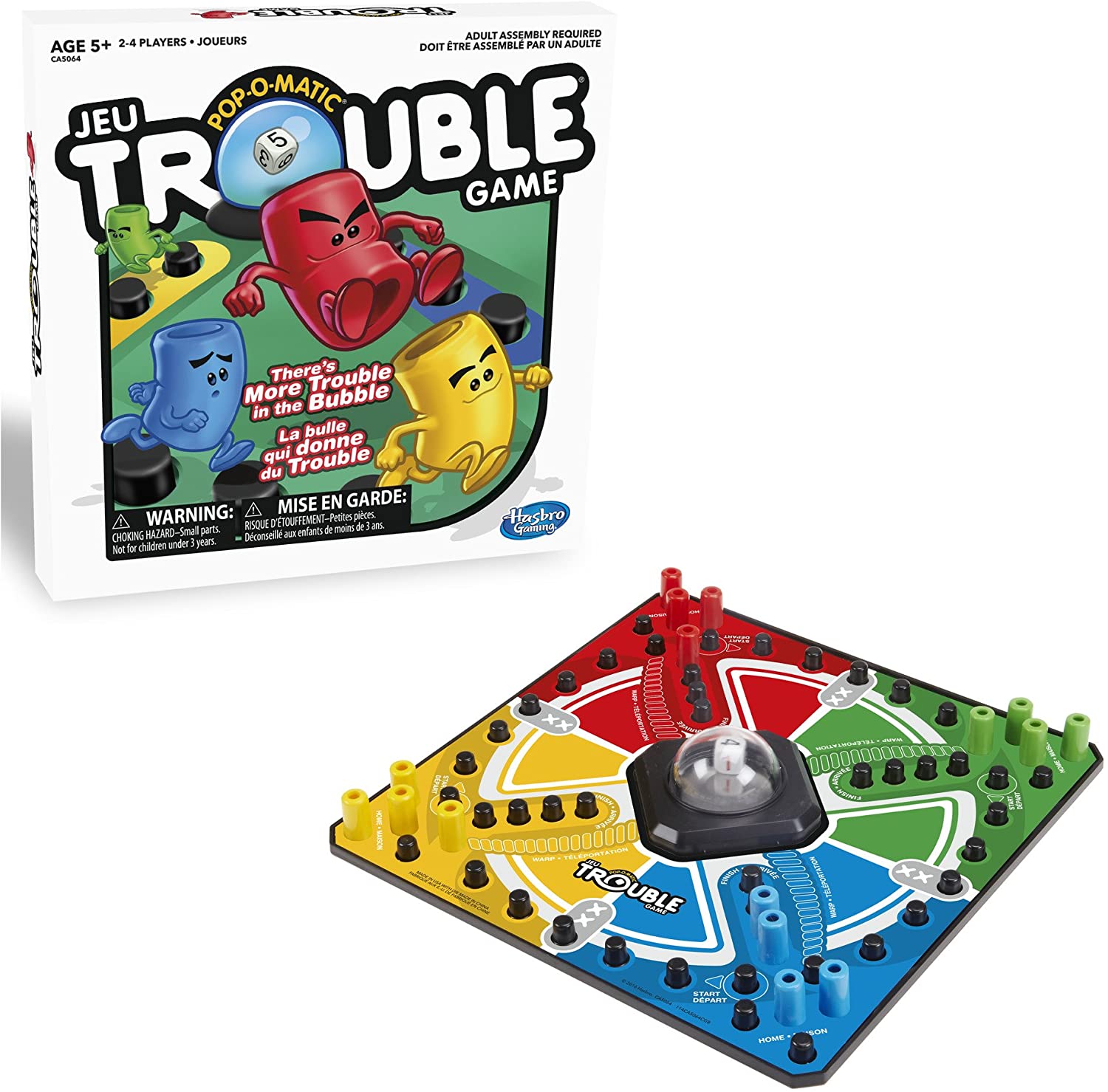 Trouble gets a bad rap for being too simple, but the reality is that this board game is perfectly crafted to teach younger players the fun of board games. Trouble has simple enough game mechanics that players as young as four can take part in the fun without getting tripped up by complicated rules. Plus, players of all ages can agree that nothing is more satisfying than pressing the little plastic Pop-O-Matic in the center of the board and hearing it “pop!”

Trouble is a roll-and-move game where players are competing to be the first to move all four of their pawns to the end of a circuit. The fun centerpiece of the board game is called a Pop-O-Matic, which is a plastic bubble containing a six-sided die. Instead of manually rolling the die, players will push down on the little bubble to let the Pop-O-Matic roll it for you. This has the added advantage of not only allowing younger players to roll but also making sure you never lose the die.

Trouble uses a board game with a circuit of tracks weaved around the board. Each space has a little peg hole for you to insert your pawn into each time you move forward. Players will begin with each of their pawns at their own unique start space. They’re then given the goal to move all four of their pawns to their own individual finish space located at the corner of the board.

Each turn, a different player will roll the die and move their pawn the number of spaces shown by the die. To start the game and move one of your pawns out of the home space, you’ll need to roll a 6, which then allows you to roll again. When sliding into the finish space, you must roll the exact number of spaces between your pawn and the endzone, which can make it tricky to get all the way there.

Bumped Back To Home

One thing that can throw a wrench in your plans really quickly is when another player lands on your space. When this happens, your pawn gets bumped all the way back to the start. This can make for some bruised feelings among more competitive players, but that’s the risk you take when you’re playing Trouble!

Trouble is best suited for younger players, as there is not much strategy involved in rolling the die. However, you can choose which of your pawns to move forward with each roll, so there is some measure of tactic involved beyond just sheer luck. Still, Trouble is an excellent game to teach younger players about the rules of board games. You can easily use it to work your way up to more complex games as time goes on.

Trouble has a few sequel board games that give the original game a new twist or theme. Trouble: Netflix Super Monsters edition is inspired by the popular Netflix program called “Super Monsters”. Instead of nameless pawns, players can choose to play as their favorite characters from the show such as Katya or Frankie as they make their way across the board.

There’s also a Harry Potter version of Trouble called Harry Potter: Triwizard Maze Game. This version of Trouble adds new Maze cards that make the game a bit more complex. Whenever you land on one of the 10 Draw spaces on the board, you have to draw a card that can either help or hurt you. You may be in luck in that you get to go again, or it may hurt you in that you lose your next turn. Anything’s possible!

Stay Out of Trouble!

Trouble is playable by 2-4 players. It’s a good game for parents to play with their kids or for siblings to play together. It’s suitable for ages 4 and up, so this may be the perfect starter board game to teach little kids about rule-following in board games. Playing time lasts around 45 minutes, which is usually the perfect amount of time to capture kids’ attention without boring them.

Buy Trouble today and enjoy how good it feels to bounce your opponents back to the start!