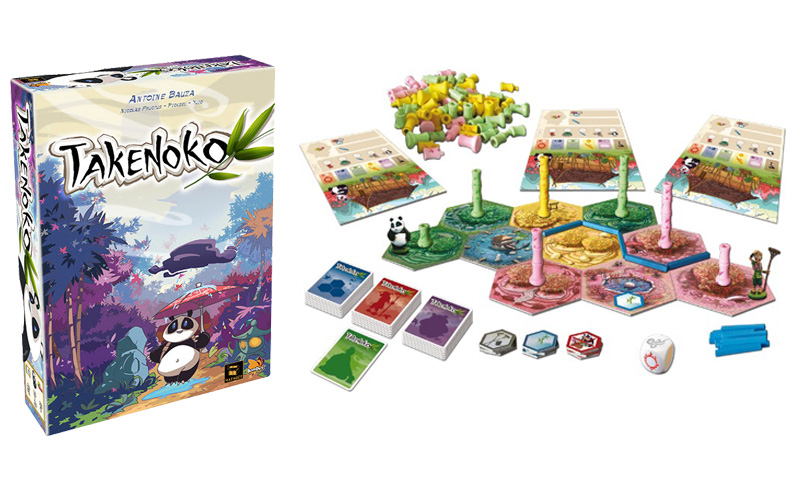 Takenoko is a board game that shines with its cute backstory and beautifully painted game pieces. The pastel-colored pieces of bamboo and the adorable little panda figurine more than set the stage for this fun and strategic board game.

Players will have to balance growing bamboo and tending to their garden if they want to feed the hungry panda and win the respect of the Japanese Emperor. If you’re looking for a game that’s as aesthetically pleasing as it is mentally intriguing, then you’ll love Takenoko.

Takenoko has a colorful backstory and setup that paints this board game amongst a beautiful backdrop. Years ago at the Japanese Imperial court, the Chinese Emperor offered the Japanese Emperor a symbol of peace: a giant, cuddly panda bear. The Japanese Emperor has entrusted you, the members of his royal court, with the task of caring for this sacred animal and feeding it from the bamboo garden.

There’s just one problem: the panda is hungry beyond belief! Players will have to work with the help of the Imperial gardener to maintain the bamboo garden and grow enough to satiate the panda and win the game. Each player is given their own player board and one of each type of playing card with which to grow bamboo, irrigate, and feed the panda.

On every turn, you’re given the option of choosing two of five available actions as well as rolling a wooden die to determine a random third action. One action is to place a tile in your bamboo garden, which helps make it bigger so that you can grow more bamboo. You can also move your Gardener any distance within a straight line, allowing him to lay down bamboo throughout your garden to grow.

You can also choose to lay down blue irrigation channels along your garden, supplying the bamboo with water to help it grow even further. In order to feed the panda, you can choose the action of moving the panda any distance in a straight line, feeding the panda with the piece of the bamboo on which the panda lands.

The last action you can choose to take each round is to collect a target card. Players will begin the game with three target cards that assign them various goals for earning victory points. These can be things like arranging tiles of a certain color in a particular way or even growing bamboo of a certain color to particular heights. More difficult goals result in a higher amount of victory points when achieved.

Takenoko ends once one player has successfully completed seven goal cards. Once this has been achieved, that player will lay down the goal card, and the players will continue until the last player has finished their turn. The player with the most points is then crowned the winner of the board game.

There is an expansion of Takenoko called Takenoko: Chibis that adds a second female panda to the mix. But with more pandas comes more mouths to feed, so you’ll have to contend with not only mama panda but nine different baby pandas as well!

Takenoko: Chibis comes with a miniature female panda, nine baby panda tiles, as well as new plot tiles, cards, and bamboo pieces. The addition of extra pandas to the game makes this expansion a bit more fun and complex than the original.

Takenoko: You Won’t Like a Panda When He’s Hungry!

Takenoko is playable by 2-4 players, as it only comes with up to four player boards. This board game is well-suited for one on one games as well as small groups, as the turns go relatively fast. It’s suitable for ages 8 and up, so younger players should be able to quickly pick up the rules. However, it does come with a cute little comic that describes the backstory of the game as well as provides a refresher on the rules.

Playing time of Takenoko lasts around 45 minutes, so you should get a decent amount of time to dive into its world. Buy Takenoko today and enjoy the cuddly cuteness of this hungry hungry panda!