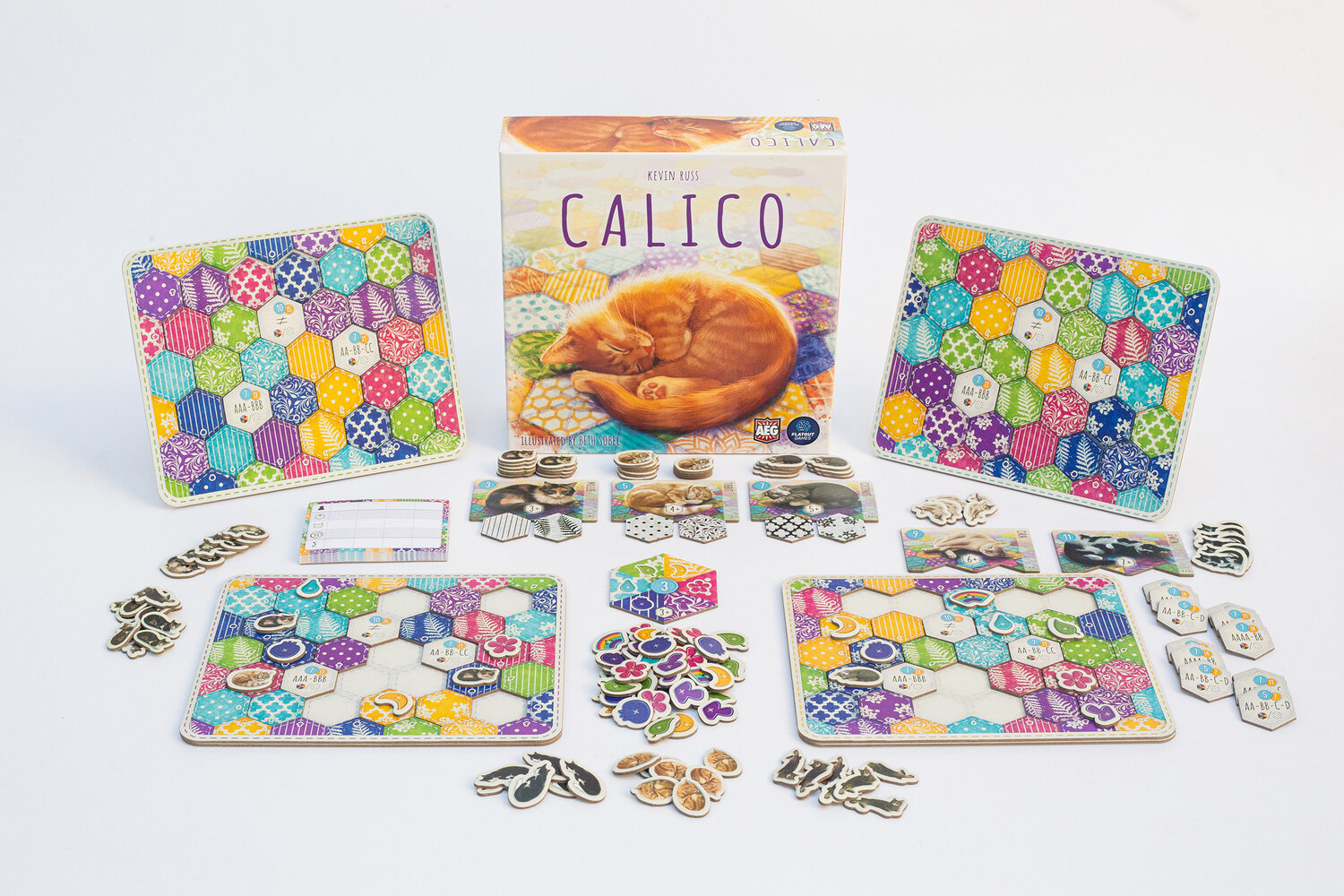 Board games offer us the opportunity to see who can be the most strategic, the most conniving, and the most knowledgeable. But have you ever played a board game that required you to be the coziest? Calico is a tile-laying board game that gives you the goal of sewing the coziest quilt possible in order to attract some super cuddly cats.You’ll sew in patches of various colors and patterns in order to earn the most points and win the hearts of felines everywhere.

Sew It All Together

Each player begins Calico with a playing board that represents a quilt that they have to sew. The patches of the quilt are arranged in hexagonal spaces, which come in six different colors and patterns. Players begin with two random tiles from the bag, while three tiles get laid out in the center of the table for players to choose from.

Three spaces on your quilt will be used to place scoring tiles. You get to draw four out of six scoring tiles, selecting whichever three you’d liked to place on your board at the beginning of the game. These scoring tiles will set your objective for the rest of the board game, giving you unique placement rules and patterns to follow.

You can earn extra points for the way you place the surrounding six tiles, earning points for things such as having three sets of two matching colors or patterns. If you satisfy both of the conditions on the scoring tile, then congratulations! You’ve just earned extra points. However, there will be some overlap with the six tiles that surround the other scoring tiles, so you’ll be hard-pressed to make too many of those combinations.

In addition to the three tiles that sit in the center of the table as a central market, you also get three little cat tokens. You’ll pick these randomly from the twelve cat tokens of the game, and each will come with its own scoring rules and patterns. In order to attract these cuddly little cats to come take a rest on your quilt, you’ll have to satisfy their conditions.

As you go along in the game, you’ll place one tile and draw one tile each turn, always keeping a hand of two tiles. You must always draw from the three tiles in the center, replacing them from the bag as you go along. There isn’t much competition with the other players until the end of the game, as you’re mostly focused on sewing the best quilt you can rather than disrupting the other players.

You earn points throughout the game by satisfying the requirements of your scoring patterns, attracting cat tokens, and earning buttons for your quilt. In order to add a button to your quilt, you must place three of the same color in adjacent spaces, which earns you a matching colored button. If you manage to get a complete set of six buttons, then you earn a special rainbow button for your quilt.

There are some hexagonal spaces that are built into your Calico board on the surrounding edges of your quilt, which can help you to make matches and attract your furry feline friends. Once everyone’s quilts have been completed, you’ll tally up the points from the scoring tiles, cats, and buttons to determine the winner.

Embrace Your Cuddly Side with Calico

Calico is playable by 1-4 players. It’s just as good as a single player game as it is a game for small groups since your main objective is simply to earn the most points. Calico is suitable for ages 13 and up, so teens and adults alike can enjoy the fun of the cuddly little cat tokens. Playing time for Calico lasts around 30-45 minutes, which makes it a decent board game for weeknights or parties.

Calico is a great pattern building game for people who are more into abstract strategy than crushing the competition. The cat tokens are obviously the selling point of the game, as you’ll do whatever it takes to fill your board with these cute creatures. Buy Calico today and enjoy the coziest board game you’ll ever play!