5 Second Rule: Just Spit it Out! 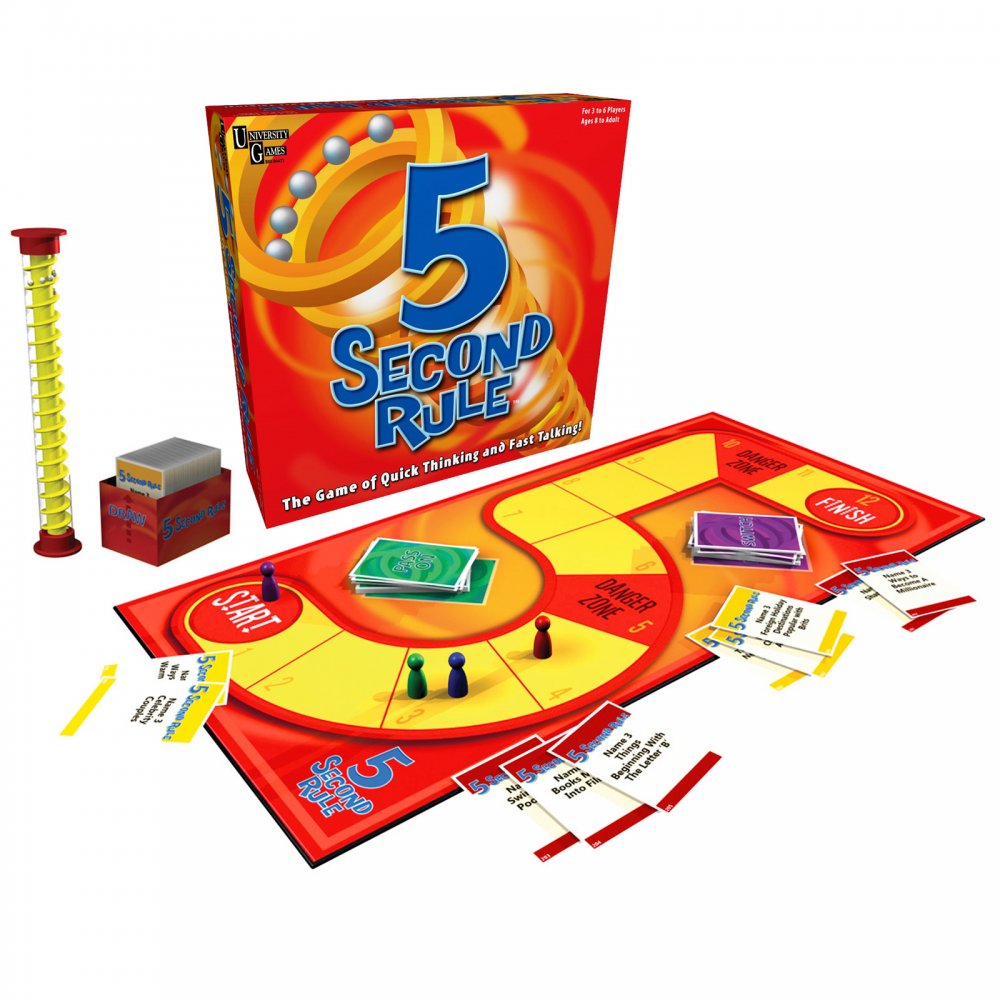 Trivia board games often favor people who have a deep and encyclopedic knowledge of a bunch of different categories. With 5 Second Rule, however, the playing field gets leveled by forcing everyone to think on their feet. Sure, you’re a major film buff, but can you name three movie directors in only 5 seconds? With wacky categories and fast-paced gameplay, 5 Second Rule is the perfect party game to break the ice and loosen everyone up.

5 Seconds on the Clock

5 Second Rule has an incredibly simple premise. As its name suggests, this board game gives you 5 seconds on the clock to name three types of “something” based on the category of the card you draw. Each round, the reader will read a card to the next player in the hot seat, telling them to “Name 3 _____”. Players who guess all three correctly will win the card, which counts as one point.

These categories can be anything from picnic foods and shoe brands to more complicated guesses like Big Ten colleges or movie directors. The board game comes with a box of 288 double-sided cards, giving you a whopping 576 different categories to choose from.

It also comes with a giant timer full of metal balls, which is incredibly fun to use. One highlight of the game comes from whoever gets to flip the timer, watching the metal balls spin around until they hit the bottom with a loud clang.

Part of the fun of 5 Second Rule is the random stuff that comes out of your mouth as you try and quickly spit out three dog breeds in only 5 seconds. There’s no penalty for wrong guesses as long as you correctly guess all three by the end of your time, so just say whatever comes to mind! You’ll be sure to crack up laughing at all of the hilarious knee-jerk associations your friends and family come up with off the top of their heads.

Going Round the Circle

5 Second Rule puts a fun spin on the basic mechanics of the game that keeps everyone on their toes. If the player who is guessing that round guesses all three correctly, they win a point and the game moves to the next person with a new card. However, if they guess wrong, then the timer immediately gets flipped, forcing the next player in line to guess in the same category.

The tricky part comes from the fact that the next player isn’t allowed to use any of the answers given by the last player. If the next player can’t guess it either, then it moves down the line again until someone can eventually name all three. If no one correctly guesses all three, then the original player gets to keep the card and win a point.

5 Second Rule is a pretty fast-paced game, although its mechanics are relatively simple. Players who are looking for something a little more complex will love 5 Second Rule: Spintensity, the spinoff game that adds a spinner to the mix to give you three choices for what to do after you guess correctly.

There’s also a version of 5 Second Rule that’s fit for younger players called 5 Second Rule Jr. This version simplifies the categories, giving you easy guesses like ice cream flavors. In the opposite direction, the spinoff 5 Second Rule: Uncensored gives you all sorts of naughty categories that are fit only for players 18 and up.

5 Second Rule is playable by 3 or more players, as there is truly no limit to the number of people who can play a game. This makes it the perfect flexible party game for almost any occasion. It’s suitable for ages 10 and up, although you can easily get the family-friendly spinoff if you’d like to include younger players.

The playing time for 5 Second Rule is around 30 minutes, but you can truly play on for as long or as short as you like. Buy 5 Second Rule today and enjoy the crazy things that’ll fly out of the mouths of your loved ones!