Llamas Unleashed: One Baaa’d Move Can Make All The Difference! 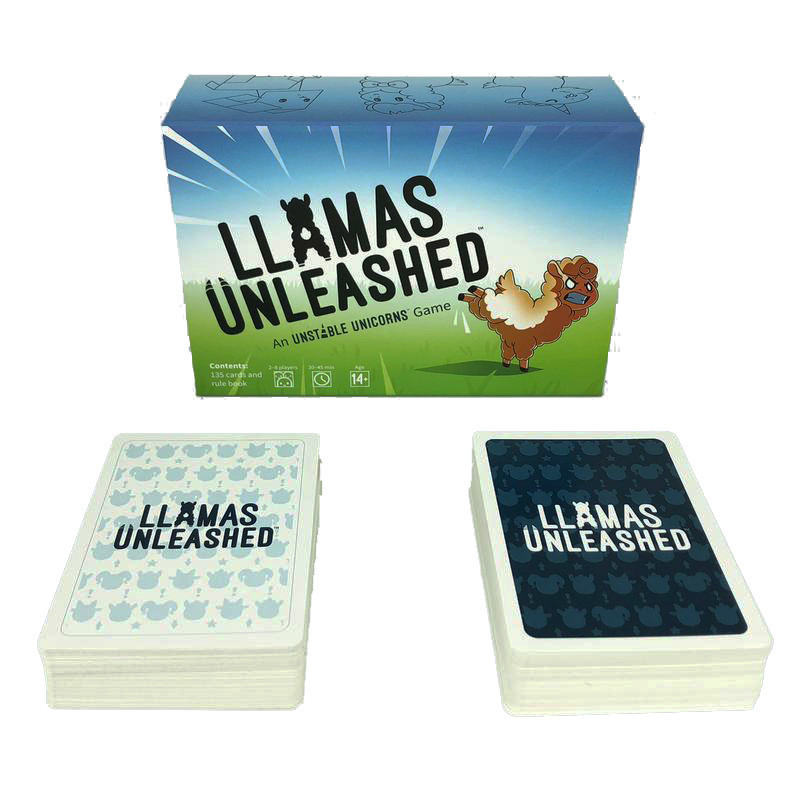 Llamas Unleashed is a card game that traffics primarily in puns. Its cards are illustrated with delightfully wacky characters such as The Fearsome Alligoater or the Adorable Alpaca that add a bit of silliness and fantasy to this goofy card game. You’ll find yourself laughing till your sides hurt as you try to avoid making any Baaa’d moves and having to Alpaca Your Bags!

The goal of Llamas Unleashed is to be the first player to collect seven different Animal cards in your field. Players will go in turns clockwise around the table, with each turn consisting of several different phases. You’ll start out by drawing one card from the deck. Then, you can either play one of your cards from your hand or draw an additional card from the deck. At the end of your turn, you’ll discard any cards you have that go over the hand limit of seven cards.

Animal cards are split into three different categories. Baby Animal cards can only enter your field from the nursery, while you can add Basic Animal cards to your hand during your turn. Basic Animal cards have no special effects, they do come with funny characterizations of what it means to be “basic”. For example, that Basic Goat card may be just what you need for your field, but do you really have to put up with his endless chatter on the phone?

Magical Animal cards have special powers that can either help or hinder you. You can play these cards in your own field or in your rival’s field depending on what’s the most helpful. For example, the Magical Ramicorn may be just what you need to add more Rams to your field, while the Bahama Llama might be a powerful way of forcing your neighbor to get rid of one of his cards and lose a turn.

There are five different types of cards in Llamas Unleashed. The first type is an Instant card, which you can play anytime that another player plays one of theirs. This can be anything from a Surprise Emu Attack that destroys another player’s Animal card to Spit Happens, which forces the player to discard their card. If someone plays an Instant card against you, however, you can counter with your own, going back and forth until the first person runs out of Instant cards.

Upgrade cards will give you positive effects such as the Venti Alpacchiato, which allows you to draw an extra card. Downgrade cards, on the other hand, will hinder you. These can be played against other players, such as the Berserk Llama syndrome that forces them to sacrifice one of their Animal cards.

Magic cards are where the game gets truly cutthroat. Whereas Upgrade and Downgrade cards will not take effect until the beginning of the player’s next turn, Magic cards have one-time effects that take place immediately. Everyone will have to watch out for cards like the Alpacalypse that rain down horror upon the group and force everyone to sacrifice one of their Animal cards.

While the goal of Llamas Unleashed is to collect seven animal cards, you get a special Herd Bonus for collecting three or more of one type. Animal cards include Llamas, Alpacas, Goats, and Rams, and having three or more of the same variation lets you use the Herd Bonus on the back of your Reference card. This can be just the thing you need to steal a card from another player or destroy one of their precious Animal cards.

Keep An Eye On Your Herd with Llamas Unleashed

Llamas Unleashed is playable by 2-8 players, which makes it an excellent card game for a party or a quick round between friends. It’s suitable for ages 14 and up, as the mechanics are pretty simple but the humor might be a bit much for younger players. Playing time lasts around 30-45 minutes, which is pretty middle of the road for a card game.