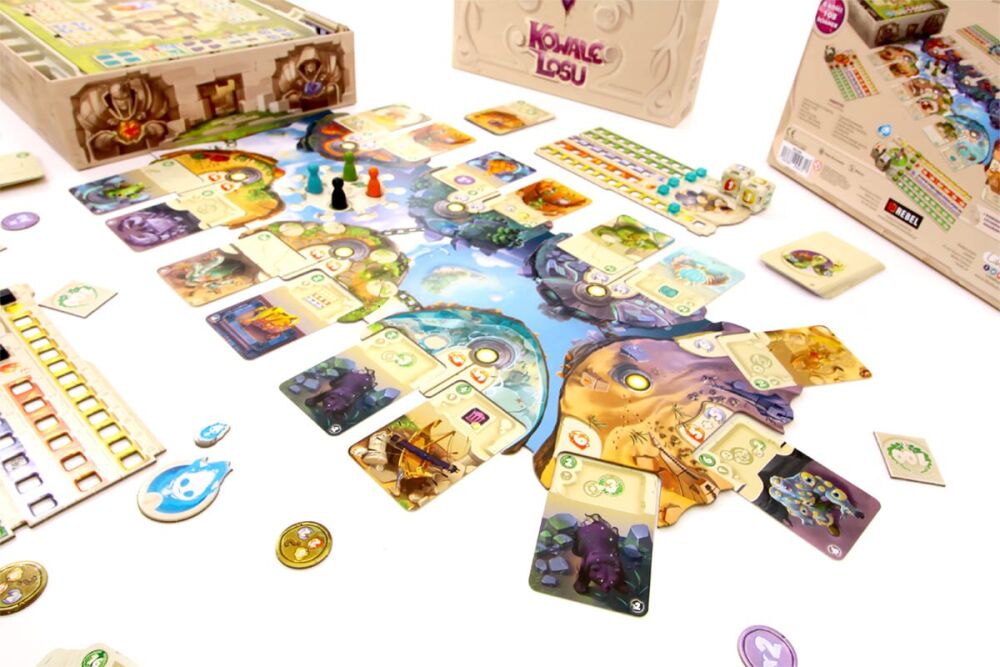 Have you always wanted to know what it feels like to walk amongst the gods? Dice Forge gives you the opportunity to earn your own seat at the heavenly table. All you have to do is build the perfect set of magical dice and roll your way to the top! Dice Forge is based on Greek mythology and assigns players the role of heroes competing to become demigods. While dice rolling has been an element of board games for thousands of years, you haven’t seen anything like the dice in Dice Forge.

Dice Forge puts a unique spin on the concept of rolling dice by using dice that have removable faces. This allows you to customize them throughout the course of the game to enhance their power and employ your winning strategy. By buying and forging new faces, you can gain new resources during your dice rolls, allowing you to buy cards to earn abilities and points.

Rolling the dice over and over again is one of the pleasures of this board game, watching as you move the little cubes on your player board up to higher spaces and see your wealth expand. You will have plenty of time to plot your strategy during the other player’s turns, as it does take a bit of time to modify the dice. Still, the anticipation and satisfaction of slipping on a new face to your die definitely outweigh the potentially clunky physical mechanics of the game.

In addition to rolling the dice, part of the mechanics of Dice Forge involve buying cards that help you along the way. The cards can give you things abilities such as being able to turn gold into points or even the opportunity for additional rolls. There are 15 cards in the basic setup, 9 of which can be swapped out for alternatives. This leaves the opportunity for countless strategies to win that make Dice Forge easily replayable. It does remain to be said, however, that not all setups work as well with only two players. Some setups really thrive in having three or four players.

One of the coolest things about Dice Forge is its incredible art and graphic design. Not only is the game board decorated with a beautiful and intricately drawn layout, but the individual dice-building boards are incredibly fun to use in your quest to forge the ultimate dice. The game pieces are by far one of the most unique elements of Dice Forge and will have you rushing to play another game just as soon as you finish your first.

Dice Forge comes with an expansion called Dice Forge: Rebellion. This expansion heavily expands gameplay by adding two different modules as well as thirty different exploit cards you can incorporate into the game. It also comes with new die faces, boards, and even an expansion to the sanctuary box. All of these new elements add challenges and increased interactions between players that make the game much more replayable.

One of the only criticisms of Dice Forge is the fact that it doesn’t have quite as many interactions between players as other board games. With the Rebellion expansion, you can make it a more interactive game that stokes the competitive spirit between family and friends.  The expansion also has the handy benefit of making it more complex, which older players will greatly enjoy.

Dice Forge: Make Your Own Luck

Dice Forge is playable by 2-4 players, although there are certain setups in the game that benefit from having more than two players. It’s suitable for ages 10 and up, so it can just as easily be a game that the kids play on a Saturday morning as it can a game for the whole family. Playing time lasts around 45 minutes, which isn’t super long compared to the amount of time it takes to set the game up and take it down. Still, many players are keen to play another round of Dice Forge right after they finish the first. Give it a roll and make your own luck with Dice Forge!