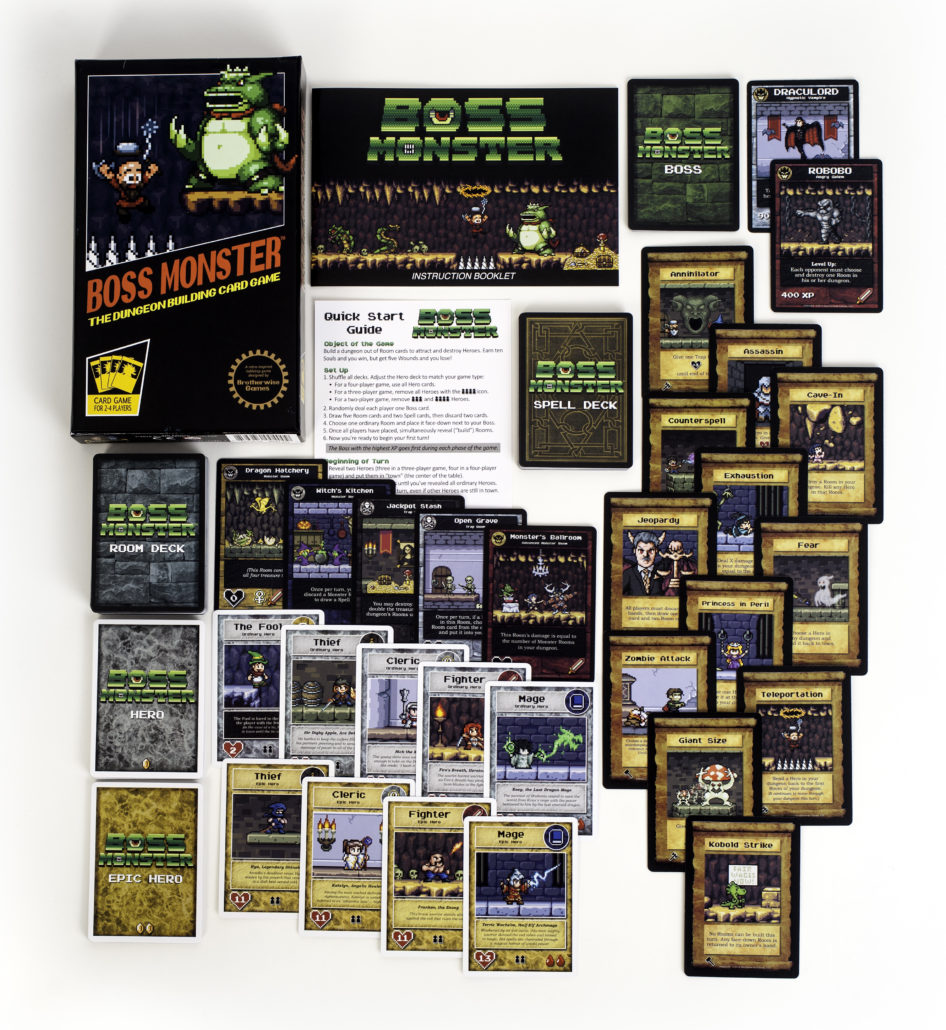 Boss Monster is the card game for anyone who loved playing classic video games. This blast from the past forces players to take on the role of the bad guy, building dangerous dungeons to lure heroes to their doom. But make sure you’re keeping an eye on your fellow players, as you want to make sure they don’t steal away those hapless heroes from right under your nose. If you’ve got a taste for the villainous and you’re a fan of fantasy dungeon RPGs, you’ll love Boss Monster.

Lure Heroes To Their Ends

Boss Monster pits players against each other in an effort to lure and destroy courageous warriors by building treasure-filled dungeons. Certain Heroes are attracted to certain treasures, so you’ll want to build your dungeon accordingly in order to lure them in. While players are racing against each other to destroy Heroes and collect the 10 or more Souls needed to win the game, they also must not underestimate the dangerous Heroes who can dish out deadly Wounds.

Players build dungeons full of magical weapons, arcane knowledge, and riches in an effort to tempt the Heroes into entering. Rooms damage a Hero as they make their way through them, and if the Hero survives all the way to the end Boss card, then they successfully Wound the player. If a player receives 5 Wounds, the game is over!

Boss Monster comes with 155 full-color cards, each decorated with nostalgic references to retro pop culture, dungeon RPGs, and 8-bit video games. The cards are split into 5 different decks: Room, Boss, Heroes, Epic Heroes, and Spell decks. Players draw Room cards to build their dungeons, throwing all sorts of nasty obstacles in the way of the hapless heroes. Each player also gets one Boss card that has a Level Up ability, giving you a special power you can use once in the game once you’ve built all 5 dungeon rooms.

You’ll play in turns, with each player drawing one Hero card. If your dungeon has the unique treasure that a specific Hero desires, then the Hero will enter the dungeon they were lured into. Players can also use special Spell cards to try and defeat the Heroes before they reach the end of the dungeon and inflict a Wound. Spell cards include unique actions such as Teleportation, which send the Hero crawling back to the first room of the dungeon, forcing them to make their way back.

The game ends whenever a player manages to collect 10 or more Souls of the Heroes. If you’re playing Boss Monster as a 2-player game and one player sustains 5 Wounds, then the game will end automatically. To win the game, you’ll have to balance the need to kill Heroes and collect their souls with the need to lure in more Heroes than the other players do. Players can use Spells against other players as well as against Heroes, giving themselves the added advantage and nabbing the winning spot.

Boss Monster: Master Of The Dungeon

Boss Monster is playable by 2-4 players. Depending on how many players you play with, you’ll have to remove certain cards from the deck that require three or four players. It’s also suitable for ages 13 and up, so it’s definitely a fun game for both kids and adults alike. Boss Monster has a play time of around 30 minutes, but you can easily play a couple of rounds in a row if you’d like to extend gameplay. With nostalgic references, exciting gameplay, and awesome illustrations, Boss Monster is a card game you won’t want to pass up.