Farkle: Do You Feel Lucky? 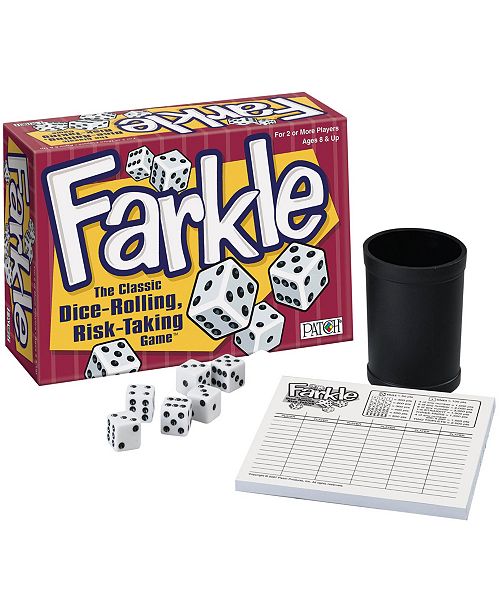 Farkle is a dice game that forces you to push your luck if you want to bank the most points and win the game. Like most dice games, Farkle comes with very few game pieces, making it an excellent game to play when traveling or camping. Roll after roll, you’ll send the dice spinning to see who can make the best combinations and avoid the dreadful “Farkle”. Fast-paced, simple to play, and easy to bring with you on the go, Farkle is a dice game that won’t run out of steam any time soon.

Get the Dice Rolling

Farkle is a traditional dice game that’s similar to the game Dix Mille (also known as Dice 10,000). The game of Farkle comes with six standard dice, a pen or a pencil, and a sheet of paper for counting points. The game begins with the selection of a starting player who’s usually chosen by the roll of the dice. Then, each player will go in turns rolling six dice at a time, trying to rack up as many points as possible each round.

The different sides of the dice equate to different points. Rolling a 1 gets you 100 points while rolling a 5 gets you 50 points. The other numbers on the dice do not get you any points on their own, but they can get you points if they’re rolled in certain combinations. For example, rolling three of a kind gives you 100 times the number rolled (i.e.three 6s equals 600 points). You get higher points for rolling four, five, and six of a kind, the last of which earns you a whopping 3000 points. You can also earn points for rolling a straight, three pairs, or two sets of three.

Obviously, the chances of rolling six of a kind on the first roll are going to be slim to none. The real strategy of the game comes from the fact that you can roll the dice multiple times, removing whichever dice you want to use for points after each roll. This means if you’re aiming to get six of a kind and you roll three 4s on the first round, you can set aside those three dice and roll the other three dice again.

The catch comes from the fact that you have to roll a scorable combination on each round. You can’t just keep rolling the dice ad infinitum until you get the combination you’re looking for. If you roll the dice and don’t get any scorable combinations, then you “Farkle” that round and wind up with zero points. Your turn ends when you either Farkle or bank your points, adding them to your score. The first player to bank 10,000 points triggers the end of the game, giving the other players one final turn to beat their score.

The Origin of Farkle

Farkle was created in the 1930s, but the game has taken on the mantle of a legendary myth thanks to its countless joke origin stories. Some say that Farkle is named after Sir Albert Farkle, the man who first played the game in Iceland in the 14th century. Others tell the story of the legendary Farkleberry tree, discovered by the early settlers of Texas. Legend has it that the Farkleberries would harden when they dried, which the settlers then carved into the shape of dice. The reality is that the origins of Farkle are actually unknown, but it’s remained highly popular for decades.

Don’t Push Your Luck With Farkle

Farkle is playable by 2-8 players, which makes it a great ice-breaker for large parties or a fun game for the kids to play while traveling. It’s also playable by ages 8 and up, so younger players can easily get a hang of the rules. Playing time lasts about 30 minutes because the rounds go pretty quickly. Farkle’s charm comes from its simplicity and its fast-paced nature, keeping you on your toes and forcing you to push your luck further and further in an effort to nab those elusive high-point wins. Buy this dice game today and enjoy the easy fun that is Farkle!