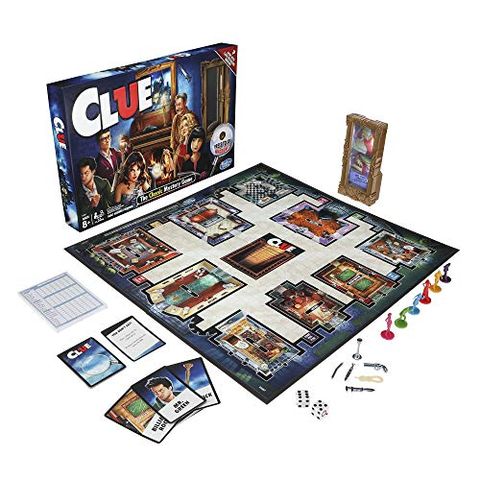 Clue is one of the most classic whodunit board games. First released back in 1949, this detective board game has made its way into pop culture with countless references, spinoff editions, and even a film. Clue combines dice rolling, memory, and deductive reasoning to create a sleuthing game unparalleled by any other. By emphasizing the skills of deduction and reveling in the ambiance of the classic murder mystery, Clue remains one of the most alluring board games of all time.

Who, What, And Where?

The Clue playing board is set up as the layout of Mr. Boddy’s mansion. Sadly, Mr. Boddy has just been murdered, and the players of the game have to figure out who did it. Not only that, but they also have to figure out what the murder weapon was and in which room it took place! The first person to accurately guess all three wins the game.

There are six suspects, each of which is controlled by one of the players. Was it the alluring Miss Scarlet or the dignified Colonel Mustard? Only time will tell. There are also six weapons, each of which could be the murder weapon. That gun looks awfully suspect, but the candlestick can be just as deadly in the wrong hands.

The little weapon pieces are some of the coolest elements of the game, as the game includes miniature replicas of the different objects. From the deadly gun to the bright yellow plastic rope, these pieces are part of the nostalgic fun that makes Clue such a memorable game. The suspect pieces are also quite clever, as each of them comes in a bright color corresponding to the name of the suspect, i.e. General White.

Each player gets their own detective notebook that they use to eliminate suspects, weapons, and rooms one by one. The game proceeds with each player placing their suspect on the board on their start places with the weapons randomly placed in different rooms. The suspect, weapon, and room cards are separated into their own decks and shuffled, while one of each gets placed into a yellow envelope to be opened at the end of the game.

Players will roll the die each turn, moving their suspect around the board until they enter a room. Each time the player enters a room, they can announce who they think the killer is and what the weapon is. If one of the players has a card that disproves their theory, then they show the card to the player for them to cross off.

Players also have the ability to make a formal accusation, which is a one-time deal. After they’ve made their accusation, they check the yellow envelope to see if they’re right. And if they’re wrong? Well, then they’re out of the game! It pays to be cautious when making your accusation lest you be too foolhardy and get eliminated before you’ve got all of the facts straight. The best sleuths know how to bide their time.

There are too many later editions of Clue to even count. Clue Master Detective, released in 1988, includes twelve possible murder locations, including outdoor locations and secret passages. It also adds a few extra weapons and suspects to make the game even harder for our amateur sleuths. Clue has also released editions based on countless films and TV shows including Doctor Who, Game of Thrones, Downtown Abbey, and even the Horror film It. If you love the nostalgia of classic Clue but you’re looking for something a little more up to date, you’ll love one of these modern editions of the game.

Clue is playable by 2-6 players, so it’s the perfect game for a family game night or a retro party. It’s also suitable for ages 8 and up, which means that younger players will be able to guess right alongside the adults. The playing time for Clue is around 45 minutes. This gives you enough time to delve into the world without losing track of the clues or growing tired of the mystery. No board game collection is complete without the classic detective game Clue.

Now… The real question is… Will you buy the game? I think I have a clue. I think you will.