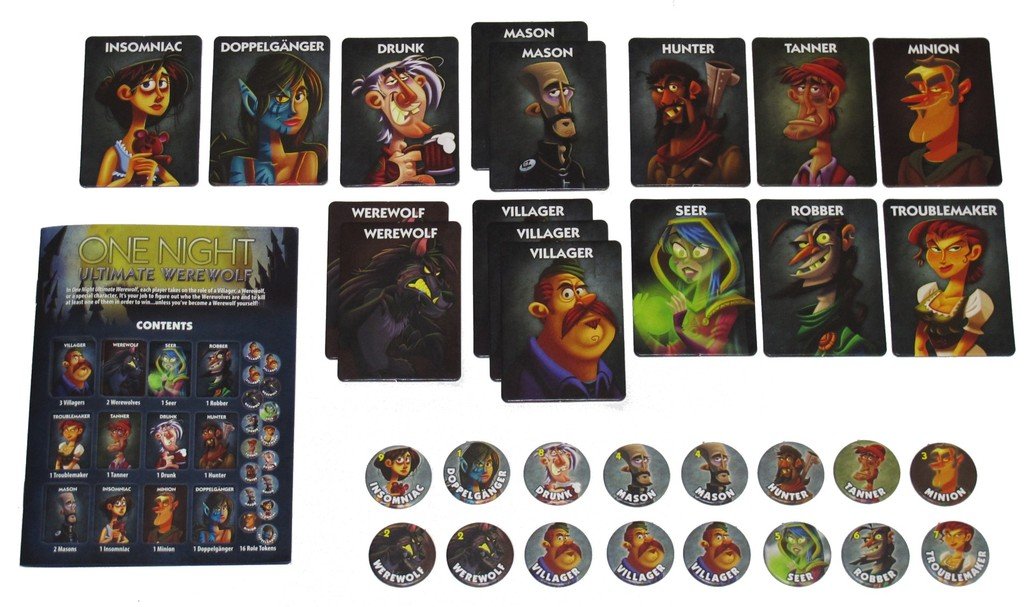 While most card games involve hours of play time and dozens of cards to manage, One Night Ultimate gives you a fast-paced game you can play in only 10 minutes. Pick your card and take on a secret role to figure out who your friends are and who you’ll need to eliminate in order to win the game. Whether you go for the Werewolves, the Vampires, or the Aliens, One Night Ultimate is sure to have you pulling out the cards at every gathering to liven things up.

Each of the One Night Ultimate games can either be played on its own or added to each other for a fast-paced game of fun. One Night Ultimate Werewolf is the first game in the series, providing you with a ten-minute game full of horror and paranoia. In One Night Ultimate Werewolf, you take the classic tale of a wolf haunting the villagers and you set it all in one terrifying night. Each player gets their own unique role at the beginning of the game, which will then have major consequences once you reach the night phase.

Whether you’re the Troublemaker, the Seer, or one of the evil Werewolves, you’ll find that horrific things have happened in the middle of the night that the whole village is going to have to reckon with. You may even find that, although you started out an evil Werewolf, overnight you became one of the innocent villagers! When everyone wakes you in the morning, each player is tasked with figuring out who they are and who the Werewolves are so that they can stop them before they kill again.\

The twist of the game comes from the switching of the roles that leaves you unsure of where your loyalties lie. Unlike most role-playing games where you’re fully aware of which team you’re one, One Night Ultimate Werewolf keeps you guessing at all times.

One Night Ultimate Alien is the next game in the One Night Ultimate lineup that is very similar to One Night Ultimate Vampire. This game features less role switching but introduces two bungling aliens who have to fight to be the last one left surviving. Figuring out everyone’s motivation for why they want certain people dead can help you piece together the clues to their identities and win the game.

Take Your Pick Of Monster With One Night Ultimate

One Night Ultimate Werewolf is playable by 3-7 players, although some of the other editions and expansions allow you to fit up to 10 players. This game is absolutely perfect for parties of all sizes, and you don’t have to worry about choosing a moderator or having anyone get eliminated. With a playing time of 10 minutes, you can easily fit a game in before dinner or drinks as a fun icebreaker.

One Night Ultimate Werewolf is also suitable for ages 8 and up, so younger kids can join in on the fun without getting confused by complex rules or adult themes. Still, One Night Ultimate games are all fun and interesting enough that adults will be able to enjoy the deeper strategy of the game. One Night Ultimate is the perfect game for anyone who loves monsters and using their skills of deduction.

Grab your flashlight and put on your thinking cap for an adventure tonight!