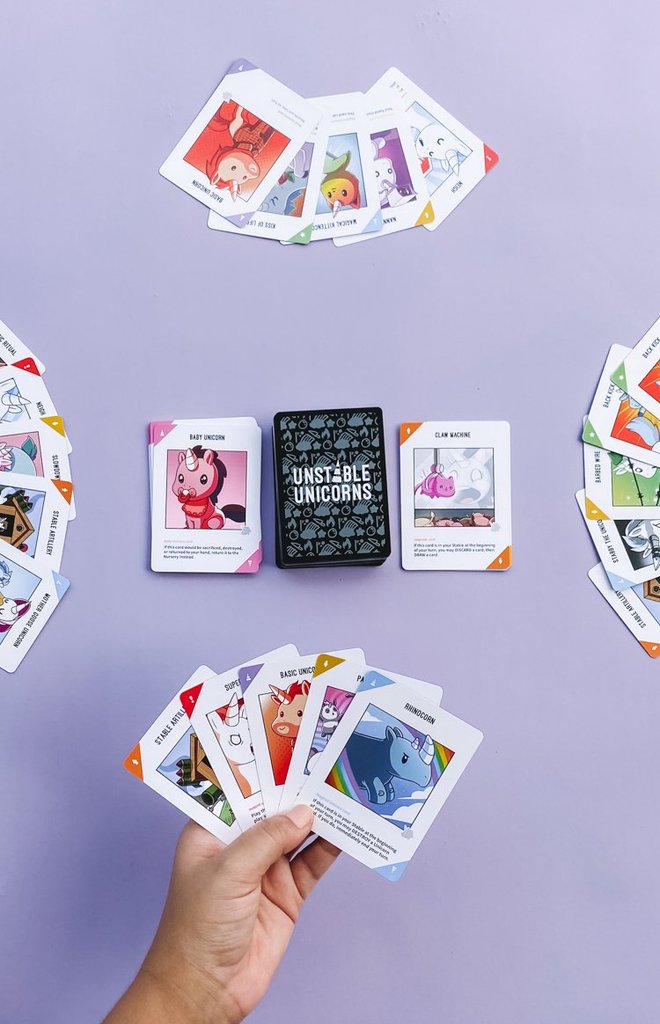 What could be more adorable than a game about unicorns? After all, these magical creatures have always been portrayed as gentle and majestic creatures that wouldn’t hurt a fly. The unicorns in Unstable Unicorns, however, are about as far from this depiction as you can possibly get. In this entertaining and colorful card game, you’ll build an army of vicious and conniving Unicorns through which you can harness their magical powers for your own nefarious means. With creative drawings and unique twists, Unstable Unicorns is a card game with limitless imagination.

Building Your Army Of Magical Unicorns

You begin Unstable Unicorns with a single Baby Unicorn in your stable, which you must then grow into an army of magical Unicorns, each with their own distinct powers. There are 20 different kinds of Unicorn cards that you can collect during the game, and the goal of the game is to be the first player to collect seven different kinds of Unicorns. There are also Basic Unicorn cards, which are hilariously drawn “basic” stereotypes such as modern hipsters or pumpkin spice latte-lovers.

The Righteous Ruler Of All Things Magical

The first player to build a Unicorn army with seven different Unicorn cards is declared the Righteous Ruler of All Things Magical and winner of the game. While it may seem easy to collect seven Unicorn cards, the strategy of the game comes from annihilating your competition’s armies while protecting your own Unicorns from harm.

Each player has five cards in their hand at any time (in addition to the cards in their stable that represent their Unicorn army). These cards can consist of certain types of cards that allow you to better build your army or attack other players. Upgrade cards such as Rainbow Mane allow you to add Basic Unicorns to your stable, while Magic cards such as Good Deal let you draw three cards and discard a single card.

Downgrade cards are used to attack other players or even strategically cull your army, such as the Sadistic Ritual card that allows you to sacrifice one of your Unicorn cards and draw a new one. The Neigh card is one of the most powerful cards in the game, as it allows you to stop a player from playing their card at any time and force them to toss it in the discard pile. Even the smartest strategies can fall apart when hijacked by a powerful “Neigh!”

Unstable Unicorns is already an incredibly imaginative and hilarious game, but its expansions make it even more diabolical and entertaining. The Rainbow Apocalypse expansion add double-edged cards that hurt both the player and the recipient of the card, while the Dragons expansion allows for brutal attacks on your opponents that can break up even the closest of friendships.

Find Out Who Your True Friends Are With Unstable Unicorns

Unstable Unicorns is perhaps best for parties or friendly game nights, as it can accommodate anywhere from 2-8 players. You can quickly inject some high stakes fun into a casual gathering among friends thanks to the strategy and double-crossing required by Unstable Unicorns. Playing time lasts around 30-45 minutes, so it’s a game you can easily play a round or two of without anyone losing interest.

Unstable Unicorns is suitable for ages 14+, so it may be better for adults or families with older kids than for younger players. However, the humor and imagination of Unstable Unicorns can be just as enjoyable for kids as it can for older players. If you’re looking for something that fosters friendly (or unfriendly) competition while keeping everyone laughing, Unstable Unicorns is the perfect game to spice things up.

Be careful, your neighbor is out to get you!