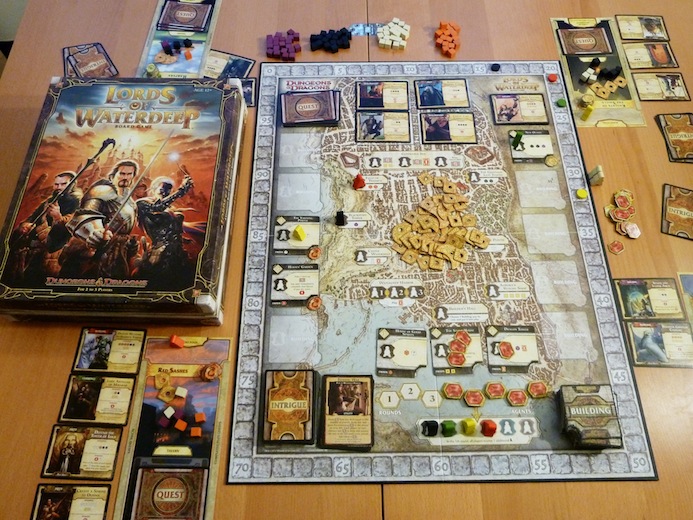 From the magical world of Dungeons & Dragons comes Lords of Waterdeep, a strategy board game that pits secretive and power-hungry masked rulers against one another in a campaign to grasp control of the city. Lords of Waterdeep combines resource gathering with card playing in an intricate and fantastical experience that will have you backstabbing your closest friends to win some much-needed victory points. The fantasy and political intrigue of Lords of Waterdeep elevate this board game from a forgettable worker placement game into a magical quest.

The Masked Lords Of Waterdeep

In the Forgotten Realms, there lies a most fantastical city named Waterdeep, the City of Splendors. As one of the masked Lords of Waterdeep, you’ll secretly recruit adventurers to embark on quests and bring back rewards with which you can grow your political influence. Lords of Waterdeep is all about the secret back-alley dealings and double crosses that determine who holds the true power of the city.

At the beginning of the game, each player will take on the role of one of the five Lords of Waterdeep. The game box comes with five different cardstock player mats with which you’ll conduct your various deeds. It also comes with hundreds of different cards, cubes, meeples, and other little colored trinkets that fill the game with colorful flourishes.

As one of the Lords of Waterdeep, you’ll control agents who will recruit adventurers to perform certain quests for them and earn rewards. These rewards will sometimes come in the form of victory points, which boost your influence over Waterdeep and get you one step closer to winning the game. Whoever wins the most victory points by the end of the eighth round is declared the winner, so you’ll have to act fast if you don’t want to fall behind.

The adventure resources are represented as purple, orange, black, and white cubes that are based on the four character classes of Dungeons & Dragons. Certain adventurers are better suited for certain quests—will your adventurer succeed in Skullduggery or does their strength lie in Commerce? You’ll need to stay on your toes and strategize if you want to block the other Lords from gaining control.

A single expansion was released in 2013 called Scoundrels of Skullport, which adds two expansion modules to the base game of Lords of Waterdeep. Whether you dive into the Undermountain module; explore the Skullport module; or add both expansions to the game, you’ll get a whole host of new game boards, cards, and tokens with which to play.

Undermountain adds an interesting new mechanic that allows you to place resources on the game board spaces while also offering you more expensive but rewarding quests. Skullport adds the corruption mechanic to the game, which includes the new corruption track game board and 25 corruption tokens. These can rob you of crucial victory points and make winning the game that much harder. If you’re a fan of Lords of Waterdeep and are looking to further explore the magical Forgotten Realm, the Scoundrels of Skullport expansion is an excellent addition to the base game.

Take Over The City Of Splendor With Lords Of The Waterdeep

Lords of Waterdeep is playable by 2-5 players, so it’s perfect for small to medium groups of friends who are looking for a new strategy board game to add to the mix. Dungeons & Dragons lovers will enjoy the familiar fantasy elements, while fantasy lovers in general will marvel at the creative imagination of the game’s designers.

Lords of Waterdeep is a somewhat lengthy game, with a playing time of one to two hours. However, hardcore strategy gamers will find gameplay completely manageable, especially when compared to most D&D quests. Lords of Waterdeep is also suitable for ages 12 and up, so it’s a great game for younger players who are looking to get into more advanced concepts of strategy and fantasy. While there are many tokens and cards to keep track of throughout the game, both beginners and advanced players alike can enjoy the adventure that lies within the Lords of Waterdeep.

Adjust your mask and plot your way to victory!