KeyForge: Card Game Of The Gods 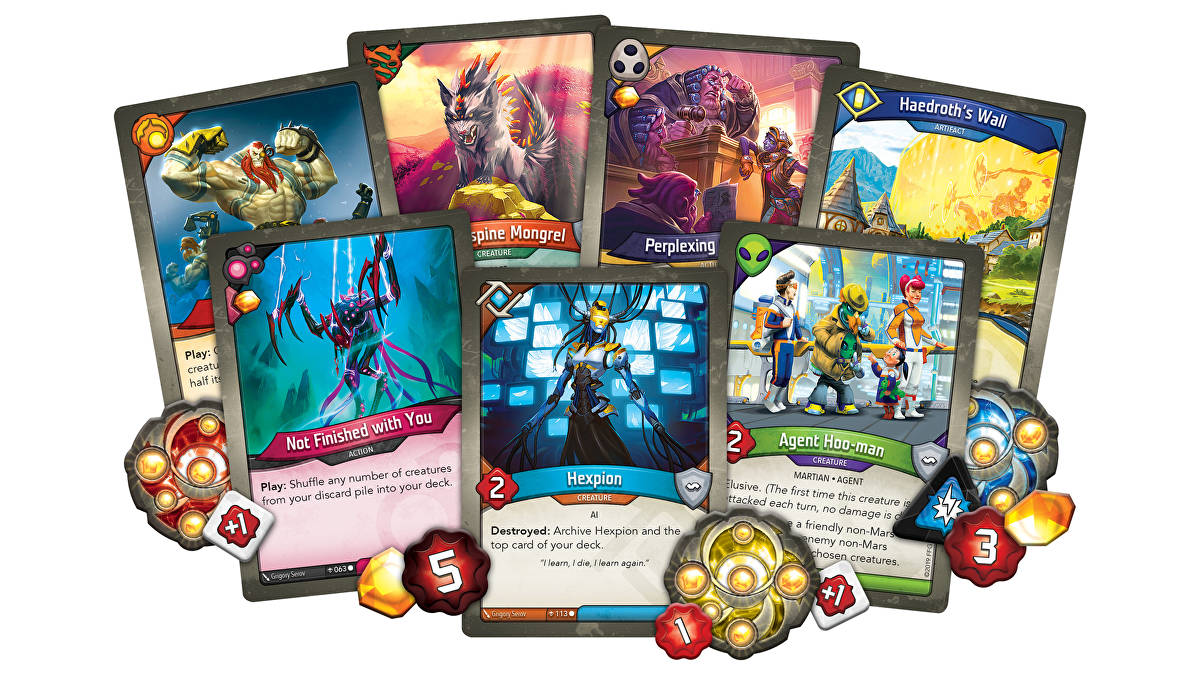 Nothing is more motivating than the ever-present thirst for knowledge and power. In the world within KeyForge, power is nothing without knowledge, and you’ll have to fight tooth and nail to access the hidden secrets in the Vaults. A strong heart and a diligent mind are required to find the right combination of cards to grow your stores of Amber while also fighting your enemies. With thrilling battles and a beautifully realized fantasy world, KeyForge is a card game with plenty of imagination.

The World Of The Crucible

KeyForge is set in the world of the Crucible, which was artificially built by the god-like Archons. These powerful beings forged the Crucible from the pieces of countless planets, and are in constant battle with each other in the pursuit of knowledge of their origins. KeyForge is a race between different factions of Archons to be the first to collect three keys and gain the invaluable knowledge and power locked away within the Vaults of the Crucible.

KeyForge is the first unique deck game in that it is sold in individual decks, each with their own random selection of 37 cards. Unlike most deck-building games, each KeyForge deck is designed to be unchangeable and played right out of the box. One of the best parts of KeyForge is the fact that each deck comes with its own name, which includes such gems as “The Boy Who Basically Head-butts Heaven.”

You won’t need to worry about shelling out countless dollars to collect different decks, but can enjoy the knowledge that you’re the only person out there with that exact combination of cards! This can create a fun challenge that forces you to make the most of the cards you’re dealt, finding the winning combination to push you forward into victory.

Gameplay involves two players each using their own deck of cards to play different creatures, actions, upgrades, and artifacts. Every card in KeyForge is associated with a specific House, and each deck comes with cards from three different Houses. At the beginning of each turn, you’ll have to declare which House you’re playing from. You can then play as many or as few cards as you like from that House during your turn. The potential to play multiple cards at once can help make for some pretty eventful turns where you can savage the competition.

You’ll have to collect enough Amber in order to forge your three keys and unlock the Vaults. Certain creatures can provide you with Amber and can also be used to fight the competition. You’ll have to balance your efforts to collect Amber with your battle tactics in order to defend yourself long enough to win the game.

KeyForge releases new cards regularly through their expansion sets, which add new Houses to the mix that provide for even more card combinations. The original set, KeyForge: Call of the Archons, comes with two starter decks and two unique Archon Decks for a total of 370 cards. Later expansion sets such as Age of Ascension or Worlds Collide add over 200 new cards each, while also throwing in new Houses such as Saurian Republic or Grand Star Alliance to make gameplay even more exciting.

Answer The Call Of The Archons With KeyForge

KeyForge is a 2-player game, so it’s definitely more suited for one-on-one situations than it is for a family game night. Fans of Magic the Gathering or other fantasy will love the creativity and potential for complex strategy building that KeyForge allows. Newcomers to card games will also enjoy the fact that they won’t have to invest a lot of time and money into building their deck—all you need is a starter deck and you’re ready to play!

Playing time lasts around 15-45 minutes, but turns go very quickly thanks to the potential for playing many cards at once. Players will love the fast-paced back and forth as they’re forced to strategize on the spot and outmaneuver their opponent’s every move. KeyForge is also suitable for ages 14 and up, so young adults will especially enjoy the fantastical world within the game.

Gain the knowledge and power to make you victorious!