Grandpa Beck’s Golf: The Perfect Card Game For Any Age 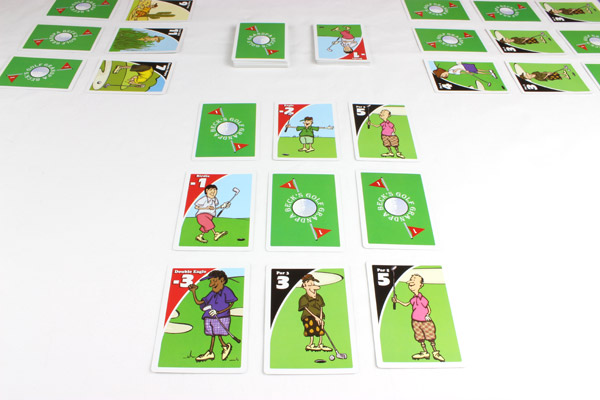 Laying Down The Grid

The game starts with each golfer being dealt 9 cards, which they lay face down in a 3 by 3 grid. Each player then turns over two cards of their choosing, without peeking at the rest of them. The other cards in the deck stay in the middle of the table, with a separate draw pile and discard pile. The game takes place in rounds, with each player taking their turn to draw a card from either their own grid, the draw pile, or the discard pile.

The fun of the game comes from the strategy in which you draw cards and set up your grid. Because the golfer with the lowest score is the winner in a traditional game of golf, whoever ends up with the lowest score in Grandpa Beck’s Golf wins the game. You can lower your score by collecting negative value red cards, which signify things like a birdie or hole in one and subtract anywhere from 1 to 4 points from your score.

Black cards will add points to your score, but if you collect three of the same black cards in a row, then you get to subtract those points from your overall score. You can make rows horizontally or vertically, but sadly not diagonally, so be sure to plan accordingly. You’ll have to strategize carefully in order to arrange the cards in the perfect order to nab the negative bonus before your competition has a chance to act first!

There are two more card types that make Grandpa Beck’s Golf more than just a game of numbers. The Mulligan cards are some of the most powerful cards in the game, acting as wild cards to be used in place of a black card of any number. Hazard cards, on the other hand, will add 10 points to your overall score, so make sure to discard these toxic cards as quickly as possible.

The game ends once one of the players flips over the final card in their grid. If this player has the lowest score on the board, they win a bonus of -5 points. If someone else has a lower or identical score, however, then they get a penalty of +10 points. Any player who has cards that haven’t already been flipped over will have these cards added to their overall score, which can be devastating if you end up with a hidden hazard card among your bunch! As the game draws to a close, you’ll have to keep an eye on all of the other players to make sure that you’ll come out ahead by ending the game.

Tee Up With Grandpa Beck’s Golf

The best thing about Grandpa Beck’s Golf is how flexible it can to accommodate all different types of players. It’s playable by 2-5 players, which makes it perfect for families as well as for a one-on-one game between grandpa and grandson. Because it’s suitable for ages 8 and up, it’s a great way to connect different generations by giving them something to play that everyone can enjoy.

Playing time lasts around 30 minutes, but because there is no set amount of rounds in the game, you can pretty much play it as long or as short as you want to. Be sure to specify the number of rounds you want to play before you begin in order to give the game a firm endpoint (and protect you from accusations of quitting too soon!) With simple rules and entertaining game play, Grandpa Beck’s Golf is a family game for all generations.

Tee up some fun today!