Betrayal At House On The Hill: A Haunted House Game With A Twist 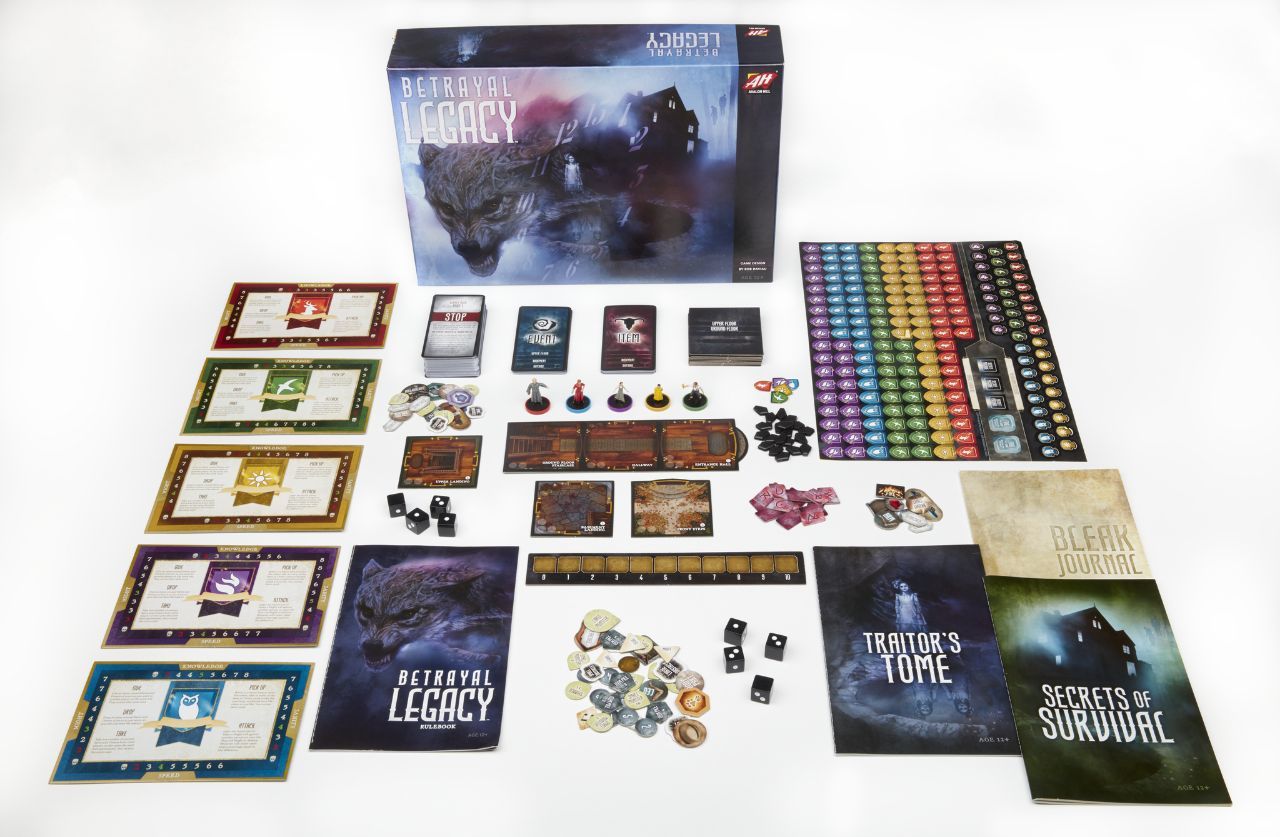 Horror-fans will be delighted by Betrayal at House on the Hill, a board game that takes the traditional haunted house story and adds a traitorous twist.  Allies explore the various rooms of a spooky haunted house, collecting items and hoping to avoid triggering the inevitable haunting phase.  Whether you’re a fan of ghosts, cannibals, or the undead, you’ll have a scary good time with Betrayal.

Players will choose one of six characters that each have four attributes that determine how close they are to death.  Might, Speed, Knowledge, and Sanity and the four attributes that will rise and fall in value throughout the game.  Betrayal begins with each player choosing a character and setting their attribute meters to their preset levels for their character.  Then, turn by turn, the players will move through the three floors of the haunted house as they begin to explore this spooky place.

Players will build the house by drawing room tiles that expand the layout of the home.  They can also trigger certain events that will either cause damage or provide benefits by drawing Event cards.  Omen cards are similar to Event cards in that you have to roll the dice to win an item, but these cards come with a greater cost—if you roll too low, you trigger the “Haunt” phase and allow horrific creatures to descend.

The haunting phase of the game is where the real fun lies, as you can trigger a different Haunt based on which Omen you pick.  You may find yourselves battling vicious cannibals, mythical dragons, or even undead zombies or vampires depending on what the fates decide.  Each Haunt comes with its own unique victory goal for the players, and it also triggers the inevitable betrayal of the traitor.

Once the Haunt has been triggered, one player is designated the traitor who betrays the rest of the characters.  The traitor leaves the room as all of the players read through their specific rules and Haunt goals from their own individual books.  The betrayed players can use this time to come up with a specific plan to deal with the traitor, and the traitor may even plot to bring others over to their side to aid in their nefarious schemes.

Once gameplay resumes, players can now attack the traitor or the demonic creatures under his command.  Players will die when their character meters drop to their lowest levels, and the game ends when the traitor or the players achieve their victory goal.  Because Betrayal comes with 50 different Haunt options, this game offers endless possibilities for some good horrific fun.

Betrayal at House on the Hill already comes with a ton of cool options and dynamic elements that help keep it fresh time after time.  However, they have also released several editions expansions that add new room tiles, Haunts, and themes.  Widow’s Walk is the first expansion released in 2016 that adds 50 new haunts and allows you to explore the roof in addition to the other three floors of the house.

Later editions of Betrayal include Betrayal at Baldur’s Gate, which puts a Dungeons & Dragons spin on the game.  They’ve even announced plans to release Betrayal at Mystery Mansion, a Scooby-Doo themed version that adds the Mystery Machine gang to the mix.

Watch Your Back With Betrayal

Betrayal is playable by 3-6 players, so it’s a perfect game for families or groups of most sizes.  It’s also suitable for ages 12 and up, so you don’t have to worry about the spookier elements of the game being too off-putting to younger players.  Playing time lasts around an hour, which is a decent amount of time to delve into the world of Betrayal without getting bored of the premise.

Betrayal at House on the Hill is one of the most interesting thematic board games to come out in the last few decades.  Its captivating creatures and wicked premise can stimulate the imagination and keep things fresh and exciting.  Dive into the supernatural but be careful who you trust with this adventurous board game.

You know you want this game… Go on, add it to your cart.