Dominion is the Deck-Building Game of Kings 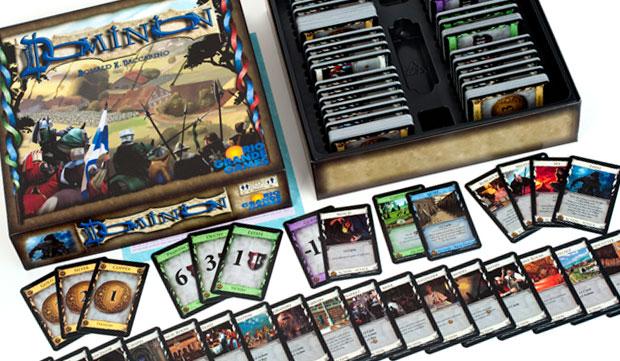 Dominion begins with a simple premise: you’re a power-hungry monarch looking to turn your small kingdom into a vast dominion you can call your own.  To capture the anarchic lands around your kingdom before your monarch rivals have an opportunity to steal them out from underneath you, you’ll have to build a deck of cards so powerful that no one stands a chance.  https://youtu.be/csQ6Vu-pqpY

At the beginning of the game, each player begins with a small deck of identical cards.  During each round, players will have the opportunity to grow their deck from a common pool of cards to help them gain Victory Points and win the game.  There are four different types of cards you can collect in Dominion.  The first type of cards are Victory cards, which are useless except for their Victory Point value. Curse cards are the opposite of Victory cards, taking away Victory Points from your total score.  One of the most useful types of cards is a Treasure card, which gives you Coins for purchasing more cards.  Action cards are also useful, which give you certain effects such as the ability to draw or get rid of cards or even hurt other players.

Action, Buy, and Clean Up Phases

Each turn contains three phases that every player must go through.  The first phase is the Action phase, where a player can play one Action card (unless otherwise specified by the card).  The second phase is the Buy phase, where a player can play their Treasure cards and earn Coins for buying more cards.   After these two phases are done, the player discards their used cards and replaces their deck with 5 new cards.  One of the most interesting parts of Dominion is that you must use your non-Victory cards in the turn after you receive them, otherwise you’ll have to give them up.  This gives everyone an equal opportunity to succeed each round, leveling the playing field and making it that much more difficult to ensure victory.

Throughout Dominion, each player is trying to amass the greatest number of Victory Points while preventing their competitors from doing the same.  The game will only end when either all of the Province cards have been drawn or when one of the three Supply stacks is empty.   You have to collect Victory cards to succeed, but the more Victory cards you collect, the less room you have in your deck for useful cards that can help you fight the competition.  Success requires you to skillfully balance collecting Victory cards while leaving yourself enough room to maneuver the purchase of powerful Province cards.

Dominion was released in 2008, and since then there have been several standalone expansions as well as some that you can integrate with the original game.  The Intrigue expansion allows you to use powerful Hybrid cards that earn you Victory Points in addition to giving you useful abilities.   Dominion: Seaside adds in Duration cards, which create effects that last far beyond their initial appearance and can throw a game-changing wrench in the works.  No matter which expansion you choose, you can open up the world of Dominion and turn a simple deck-building game into a complex menagerie of cards.

Rule Your Kingdom with Dominion

Dominion serves 2-4 players, which makes it a great card game for small groups of friends.  Because it’s suitable for ages 13 and up, families with teenage kids can enjoy the world of Dominion, although it may be too advanced for younger kids.  Playing time is only 30 minutes, so it doesn’t have the same time commitment as other fantasy games such as Catan or Dungeons & Dragons. Dominion is a simple and fun deck-building game with a delightfully narcissistic premise and intriguing gameplay.  The continued element of luck requires you to be flexible throughout the game in order to win the most Victory Points.  Although Dominion was not inspired by Magic: The Gathering, anyone who loves that game will surely find a home with this game that inspired a whole slew of future deck-building games.  Claim your throne and expand your kingdom with Dominion—it’s your destiny!

How to Play Dominion