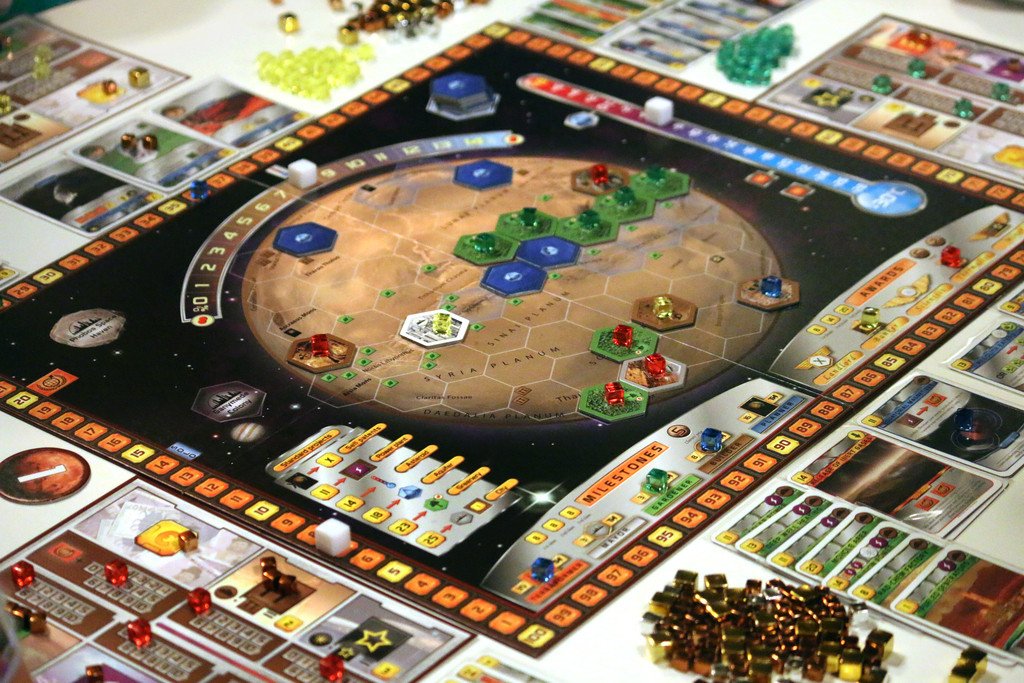 Popular board games like Risk and Pandemic deal with the incredibly high stakes of worldwide catastrophe and war.  Terraforming Mars, however, leaves Earth behind completely in an effort to build a sustainable life on our closest neighboring planet.  In the 25th century, giant corporations seek to initiate projects to make Mars hospitable.  As players of the game, you’ll have to work together to achieve these goals while also earning points for your own commendable work.

Terraforming Mars comes with over 200 different project cards that you can buy and use during each round.  These cards represent different projects that aid in your overall goal of terraforming Mars, including small things like introducing plant life or giant tasks such as mining the moons of planet Jupiter.  Some cards will also give you immediate bonuses or help boost your resource production.

While buying the cards comes with a small cost, the cost of putting them into play depends on the size of the project.  You’ll have to build up enough income to afford some of the costlier projects if you want to beat your fellow competitors and win the most victory points.

In each round, players go through three phases.  The first phase is the research phase, where each player is given the opportunity to buy randomly drawn cards.  Then, during the action phase, players can perform 1-2 actions such as playing a card, using the action of a card in play, or small tasks like converting heat into a temperature raise that slowly help to terraform Mars.

While each player’s goal is to obtain victory points through buying cards and completing projects, the ultimate goal of Terraforming Mars is to complete the three terraforming conditions that make Mars habitable.  Once the oxygen level and temperature have both been raised to sufficient levels and enough of Mars has been covered by ocean, then the game ends.  Players will then count all of their points based on their Terraforming Rating and achievements, and the player with the highest score wins.

Terraforming Mars comes with five unique expansions that add cool elements to the game such as the planet Venus or a Martian government.  With the Hellas and Elysium expansion, you’ll play with a new double-sided board that can make gameplay last for hours of fun.  The Venus Next expansion transports the game from Mars to Venus, as mankind’s colonization of the planets knows no bounds.

The Colonies expansion adds different areas around the solar system that players can use to produce resources without needing to play cards.  The Turmoil expansion adds the intriguing element of a Martian government that players can manipulate to achieve their own ends and earn elusive bonuses.  Several more expansions are currently in the works as Terraforming Mars continues to be a popular game for all kinds of players.

Terraforming Mars Is Out Of This World

Terraforming Mars can be played by anywhere from 1-5 players.  The fact that the game is so versatile means that you can enjoy it just as easily playing it on your own as you can with your entire family or friend group.  While there are many interesting elements and complex strategies involved with Terraforming Mars, it’s not too difficult to comprehend, and should be suitable for ages 12 and up.

Terraforming Mars is a bit of an endeavor, as playing time usually lasts around 2 hours.  If you add one of the optional expansions to the mix, you may be looking at an entire night spent building cities and hurling asteroids.  Still, Terraforming Mars is certainly interesting enough that you won’t become tired of it before the game is over.  With a creative premise and endless potential for strategy, Terraforming Mars is one of the top strategy board games on the market.

How to Play Terraforming Mars