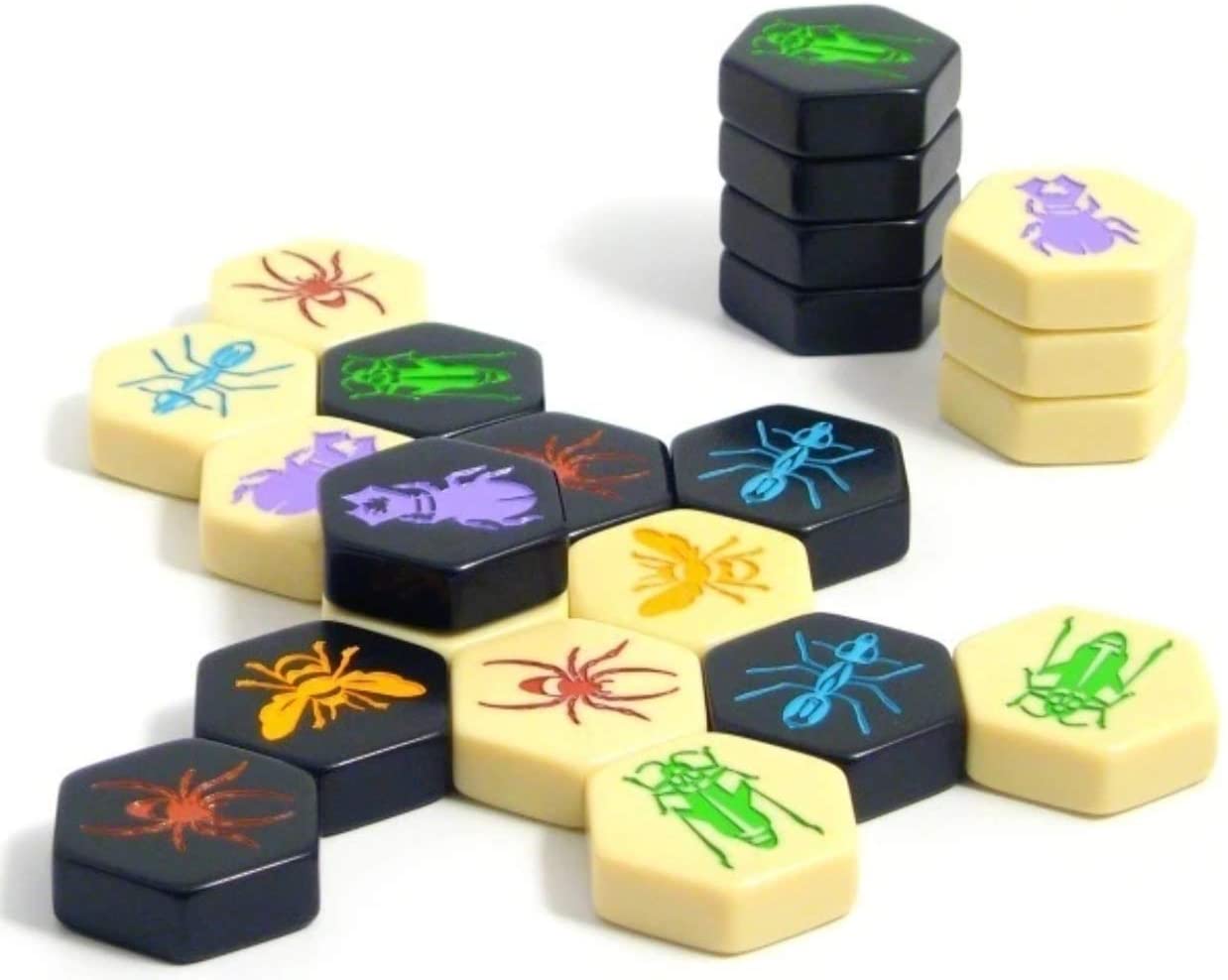 Chess is a time-honored classic that pits two players against each other as they strategically move pieces around a game board in order to capture the other side’s King.  The game of Hive turns chess on its head, getting rid of the game board and replacing the pawns and rooks with spiders and beetles.  Hive lets your build the game board yourself as you deftly place these hexagonally shaped bugs in an attempt to capture the powerful Queen Bee of your rival hive.

Insects of the Hive

There are 22 total pieces in the game, so each player gets 11 pieces for their hive.  Each of the pieces contains a colorful insect carved onto a shiny black or white hexagonal tile. Unlike a traditional beehive, both hives in this game are populated with additional insects that defend the Queen Bee and attempt to trap the other player’s Queen Bee.  Each player gets one yellow Queen Bee piece, which can only move one space at a time.

Players also get two brown Spiders pieces and two purple Beetles pieces.  While Beetles can only move one space at a time, they can climb over other pieces and prevent them from moving.  The Spider, on the other hand, can move three spaces around the outside of the layout, which tends to be more useful early on in gameplay rather than later.

The three green Grasshopper pieces can jump over pieces in a straight line, while the three blue soldier ants can move as many pieces as it likes around the edge of the hive.  Each insect must be deployed to either protect the Queen Bee or surround the other player’s Queen Bee.

Players take turns setting down their pieces and forming patterns, allowing them to play their pieces however they see fit.  The Queen Bee piece must be played within the first four turns of the game, which gives each player a limited amount of time to develop their opening strategy.  Every turn after that forces you to decide between putting another piece on the game board or moving one of your current pieces.

The publisher recommends a couple of opening strategies, although potential strategies are limitless.  One recommended strategy is to place a Spider, Bee, and Ant in a V formation, allowing the Ant to protect the Bee while the Bee is free to roam.  Another strategy is to form a V with two Spiders and a Bee, giving you the freedom to move quickly to block your opponent.  Once a Queen Bee has been surrounded on 6 sides by the other player’s pieces, the game is over.

Several expansions to Hive have been released that add new pieces with their own unique moves.  The Mosquito piece can be used as a wild card, taking on the movement of whichever piece it currently touches.  The Ladybug expansion released in 2010 and Pillbug expansion in 2013 create additional offensive and defensive opportunities that can allow you to pick up other bugs or rescue your ailing Queen Bee.    Because the original gameplay of Hive is only 20 minutes, these expansions can extend playtime and make Hive last almost as long as a chess game.

Build the Hive and Capture the Queen

If you’re looking for something a little more kid-friendly than chess, Hive is the perfect option.  It’s just simple enough that kids can enjoy it while still allowing for adults to enjoy a more complex game.  The beautiful wooden hexagonal tiles are also one of the biggest standout elements of the game, creating a visually stunning board as the game goes along.

Similarly to chess, Hive is designed for only two players.  While this is not the game for family game nights or group hangouts, it’s an excellent game for couples or lighthearted tournaments.  Hive is suitable for ages 9 and up, so two kids squaring off can have just as much fun as a parent and child can.  The more you play Hive, the more you’ll begin to uncover the numerous strategies and methods you can employ to win the game and avoid the dreaded stalemate.

How to Play Hive