Break Out the Pen And Race Against the Clock With Telestrations 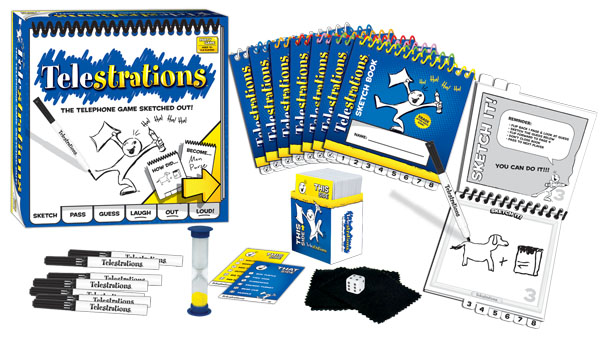 Nothing livens up a party like Telestrations, a drawing-based game that will have you scratching your head and asking, “Is that supposed to be a cat or a pony?”  While charades has been a time-honored classic for parties, Telestrations gives it a run for its money by adding a unique premise and a more complex method of gameplay.  Telestrations’ simplistic set up and gigantic supply of secret words to draw from will keep you playing this game for years to come.

The game begins with each player being given his or her own drawing book, marker, and a card with a list of secret words.  A player then rolls a die to determine which of the six secret words each person has to sketch, and players have 90 seconds to draw that sketch to the best of their ability.  You’ll have plenty of opportunity to sketch, however, as the books get passed back and forth from one player to the next during each of the three rounds.

While you may think that the best artist in the group is going to have the upper hand, this isn’t always the case with Telestrations.  One of the most fun elements of the game is the way it allows for endless creativity, forcing players to come up with creative and unique ways of depicting their secret word.  You may not be a Picasso, but that doesn’t prohibit you from coming up with some pretty funky drawings.  You may also end up winning points simply by appealing to sense of humor of the player making the guess, so know your audience!

Telestrations puts a fun and unique twist on this guessing game that makes it much more interesting than charades.  Instead of each person having to guess what one player has drawn, each player will pass his or her book to the left for the next player to guess.  Once each player has finished writing down their guess, players pass the book again to the next person, who will then draw the word that the previous player guessed.  This back and forth of guessing and drawing continues until each player ends up with their original book.

The person who wins the game isn’t always the person who was able to draw the best.  At the end of each round, each player is given three points to award.  The first point goes to whichever player drew their favorite sketch.  Whether it’s the funniest sketch, the best-drawn sketch, or even the worst-drawn sketch, each player gets to choose their favorite according to their own rules.

The second point goes to whichever player made their favorite guess.  This can just as easily go to your savvy sister who guessed correctly as it can to your clueless aunt who was way off base.  The last point is awarded to each player if and only if the final guess corresponds to his or her secret word.  The final winner is whoever managed to win the most points throughout the three rounds.  With the potential for endless creativity and comedy, you’ll be sure to enjoy Telestrations regardless of who wins.

Sketch Against The Clock With Telestrations

Telestrations is suitable for ages 12 and up, although you can definitely accommodate younger kids by using simpler secret words to guess from.  Telestrations can be played by 4-8 players, which is great for parties or large families.  Because game time only lasts around 30 minutes, it isn’t too big of a commitment.  The flexibility of how many rounds you play allows you to stretch or shrink Telestrations to whatever length you prefer, making it a versatile game that can fit any kind of party.

The biggest thing that makes Telestrations stand out is the fact that it gives you erasable sketchbooks and markers to draw from and unique secret words to choose from.  This makes the experience neater than charades while also retaining the guessing game aspect that makes charades such a widespread favorite.  Give it your best guess, bring out your inner artist, and have a roaring good time with Telestrations!