Codenames: A New Take On Spy Vs. Spy 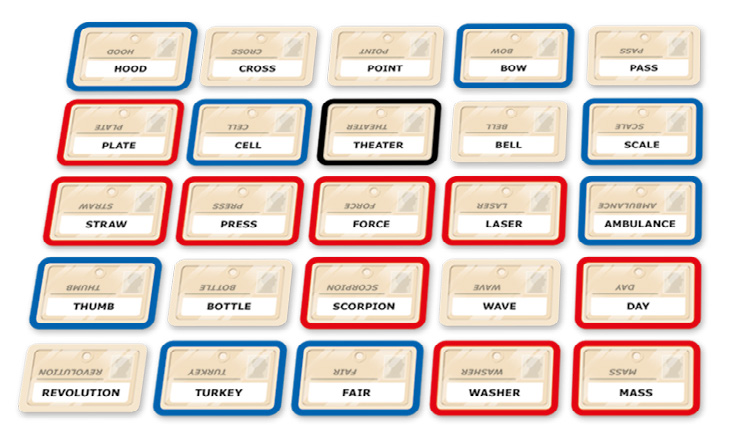 Did you grow up watching Mission Impossible and wishing you could experience the thrill of being a spy?  If so, Codenames will give you the chance to put on your spy cap and take on the role of secret agent.  Sifting through the clues and choosing wisely is your imperative if you wish to identify all of your agents and avoid the deadly assassin.  This 2015 board game is fun for all players, because whether you win or you lose, everyone can enjoy deciphering the clues.

The goal of Codenames is to figure out which codenames in a certain set correspond with the hint you’re given.  Players will split into two teams of red vs. blue, and each team will select one member to be its spymaster.  The spymaster is an incredibly fun role, as you get to dole out hints to the members of your team in order to help them figure out the clues.

The hints that you give as spymaster consist of one word and one number.  These hints will be related to the cards belonging to your agents, but be careful—if your team selects the wrong card, you may end up helping the other team.  The fun part of the game is that you are allowed to choose whatever you want the hint word to be, which allows a skilled spymaster to come up with creative and guessable hints.

The other roles can be just as fun, however, as anyone not designated the spymaster is automatically a field operative.  Field operatives get the fun task of having to guess which card belongs to their agent based on their spymaster’s hint.  Alongside your teams’ agent cards are agent cards for the opposing team, as well as innocent bystander cards.  If you slip up and end up selecting an innocent bystander, your turn is up!

While guessing the wrong card may end up helping the other team or involving innocent bystanders, there’s one card that means lights out.  The assassin hides among the crowd, looking to everyone like just your average guy.  But if you make a mistake and end up selecting the assassin card, it’s game over for your team!  The stakes are always high while the assassin is afoot.

The winner of the game is whichever team is the first to correctly select all of the agent cards belonging to their team.  With 25 agent cards and two teams, gameplay is relatively fast at around 15 minutes.  Codenames is a simple enough party game that can easily fit in between rounds of conversation.  It also fits 2-8 players, so it’s something that a big group can play with no problem.

Codenames is suitable for ages 14 and up, so it’s probably a better fit for parties than it is for families with young children.  However, even bystanders can enjoy the fun of watching the adults and teenagers deciphering clues.

Codenames has released several later editions that you can either play by themselves or integrate with the original game.  With Codenames: Disney Family Edition, you’ll guess Disney characters instead of secret agents.  This version is suitable for ages 8 and up, so it is perfect if you want to play Codenames with younger kids.  If you’re looking for something more adult, however, Codenames: Deep Undercover includes loads of adult references and double entendres not suitable for the kids.

They’ve also released Codenames: Marvel for anyone who loves the fantastical characters of the extended Marvel universe.  And if you’re a fan of the long-lasting cartoon The Simpsons, there’s even a version of Codenames that features characters and references from your favorite series.

Codenames depends heavily on the skill of the players, but it is definitely an enjoyable card game that you can play from time to time without losing its luster.  If charades is growing stale and you’re looking for something with a little more structure, Codenames will give you the same level of puzzle solving with an added layer of excitement.  Bust out your gadgets and tap into your inner James Bond with Codenames!

How to Play Codenames