All Paths Lead to Enlightenment and Fun With Tsuro 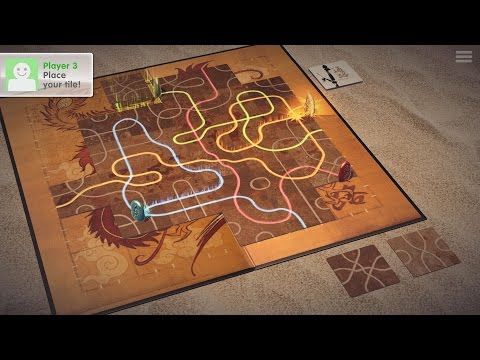 Few games include such beautiful tokens or such a heartbreaking story as Tsuro, the 2004 tile-based game that has drawn in countless players.  With simple and fast gameplay and an entertaining background story, Tsuro is a board game that will stand out in your mind for years to come.  As the board fills up and the small carved tokens follow their winding roads, Tsuro is sure to leave you desperate for another round.

The Story Of The Dragon

One of the most beautiful parts of Tsuro is its Asian spiritual theme, as the lines that you travel along are meant to represent the roads leading to divine wisdom.  The story behind Tsuro is that of a Dragon and Phoenix tasked with overseeing these paths.  One day, Ares drove the Phoenix away and turned the Dragon into a war general.  Now the Dragon seeks to follow the winding paths back to his true love, the Phoenix.  Can you help him succeed?

Laying Down The Line

At the beginning of the game, each player is given a token that must follow the path to enlightenment.  Gameplay involves laying down tiles in front of your token to keep it on the board and continue its path.  After you lay down a new tile on the 6×6 grid game board, you will move your token as far as the path takes you.  The more tiles you lay down, the faster the board begins to fill up, leading you down a path that may be your downfall.

The End Of The Road

The aim of the game is to try to keep your token on the board longer than your competitors.  The way to do this is to use strategy to ensure your token follows the correct path while you try to divert the other players’ tokens to force them out of the game.  If you reach the end of the board or end up running into someone else’s token, it’s game over for you.  Only the wisest and most strategic can achieve true enlightenment.

When there are three or more players, the Dragon tile is used to help extend gameplay.  Once you run out of tiles, the next player takes the Dragon tile to signify that they will be the first to draw from the deck of unplayed tiles left over by eliminated players.

Calliope Games published Tsuro in 2004, and have since created many different versions and spinoffs of the game.  The first was called Tsuro of the Seas, created in 2012.  This fun spinoff adds new boat-shaped player pieces as well as dangerous daikaiju tiles that will automatically remove anyone who lands on them.  This spinoff game also comes with a larger game board measuring 7×7 instead of 6×6.

Veterans of the Seas is an expansion of Tsuro that adds four new types of tiles.  These tiles range from whirlpools to tsunamis that require you to roll a die to avoid.  There’s even a Star Wars themed spinoff called Asteroid Escape, which takes the water bound game and launches it into outer space.  Instead of riding boats and navigating around whirlpools, you’ll be flying spaceships and dodging asteroids!

Tsuro: The Game Of The Path

Tsuro is a beautiful and simple game that is easy to learn.  Suitable for ages 8 and up, Tsuro is a great way to introduce your kids to board games that have a story behind them, which are often much more memorable and entertaining than simple games like Scrabble.  Game time also lasts around 15-20 minutes, which means that it’s not too much of a time investment to work in a game or two in an evening.

Tsuro also fits anywhere from 2-8 players, allowing you to enjoy the game both with a large group at a party as well as an intimate night in with your partner.  Inspired by the romance of the Dragon and the Phoenix, Tsuro is sure to ignite the romantic passions of lost love—just so long as you don’t knock the other player off the board first!  Dive into Tsuro and follow the path to divine wisdom and enlightenment.