Be The Villain of Your Own Story with Villainous 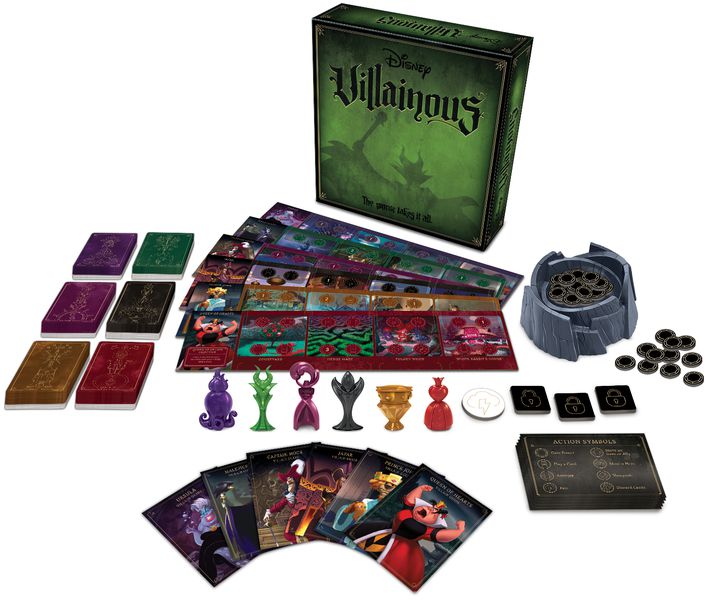 The villains always get a bad rap.  Sure, we’re meant to side with the knight in shining armor who saves the day from the wicked witch.  But who says the villain isn’t just getting a bad rap—after all, isn’t history always written by the victors?  If you’re interested in flipping the script and seeing what it’s like to be a villain for a change, you’ll love the card game Villainous.  This enchanting card game takes six of our favorite Disney villains and makes them the protagonist for a change.

From Villains To Heroes

In the game Villainous, 2-6 players choose from one of six Disney villains in a race to see who will be the ruler of the Disney realms.  Your goal in the game is to finally accomplish the evil plan that your villain put into place in the Disney movie they come from.  Whoever is the first to succeed will win the game and claim the title of supreme villain for all time.

Each turn, players will move their little Villain Mover to a different location on the board and perform one or more of the actions that are available on this space.  The action you perform depends on which cards you hold in your deck, so there is a bit of luck involved if you’re going to vanquish your foes.

The Villain lovers are definitely one of the coolest parts of the game, as each player gets a small and colorful little figurine that represents their evil villain.  From the dark red Captain Hook to the bright green Maleficent, each piece is a colorful representation of the Disney villain.  They also add an element of satisfaction to the game every time you get to slide your figurine along the board.  Other playable characters include Ursula, Jafar, the Queen of Hearts, and even the more obscure Prince John from Robin Hood.

The villains themselves weren’t always exactly righteous in the films they came from, and you’ll have to be just as ruthless if you want to vanquish your foes and enact your evil agenda.  Evil curses are just as important as restorative items when it comes to using the cards in your deck.  You’ll need both strategy and ruthlessness if you want to beat the other players.

Every time you play a card from your hand, you’ll pull another card from the fate deck to replenish your hand back up to four cards.  Cards include things like effects and conditions as well as allies who can help you accomplish your goal.  One particularly nefarious action will allow you to steal cards from another player and play the cards against them.  Not only is this an excellent way to win the game, but it’s also perfectly in line with the villainous nature of the characters!

There are several later editions of Villainous that use different evil villains you can either add to the original game or play on its own.  Disney Villainous: Evil Comes Prepared uses three playable villains: Scar from The Lion King, Yzma from The Emperor’s New Groove, and Ratigan from The Great Mouse Detective.

Wicked To the Core and Perfectly Wretched are two more editions that add famed characters such as Mother Gothel from Tangled and Dr. Facilier from Princess and The Frog.  If you’re looking to expand the original game to include additional players, these later editions can allow you to incorporate up to 15 playable characters in one game!

Try Being Wicked With Villainous

Villainous is definitely the perfect game for anyone who’s a hardcore Disney fan.  Suitable for ages 10 and up, Villainous will bring the nostalgia factor to millennial players while still being enjoyable for younger kids who may not be familiar with all of the characters.

With a playing time of around 50 minutes, Villainous is a great game for families that will capture interest without losing its charm by being too complex.  Kids and adults alike will enjoy how fast paced and imaginative Villainous can be.  Take a chance on this wicked game and see what it’s like over on the dark side!

How to Play Villainous