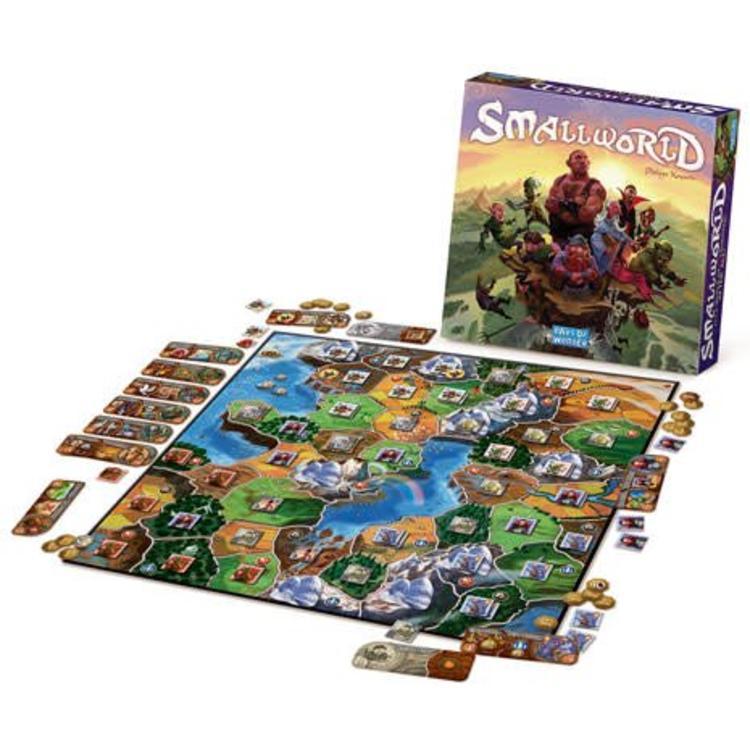 Magical creatures abound in this fantastical strategy board game that’s fun for ages 8+.  Whether you’re looking for a new rotation in family game night or a creative game for you and your friends, Small World is a simple game that can be played time and time again.  From troops of orcs to tribes of wizards, Small World allows anyone to choose their magical niche and conquer the world.

If you’re a fan of Philippe Keyaerts’ 1999 game Vinci, you’ll love Small World, his fantastical follow up game that came out in 2009.  Small World not only includes the addition of dice, but also reworks the original strategy board game into a fantastical adventure involving magical races and special powers.  Players are pitted against each other to try to conquer a world that’s only big enough for the strongest.

This board game combines strategy and fantasy, as each player has to decide on the best combination of fantasy races and special powers to expand their empires and conquer the world.  The language of Small World is force—you’ll deploy troops to occupy territory and expand to adjacent lands.  But tough decisions have to be made from within as well, because the path to victory may require you to abandon your own empire in order to build a new one that can succeed.

Small World is populated with 14 different magical races, from fantastical Elves to mythical Giants.  Each race has its own special characteristics and skills that can help you conquer regions and obtain Victory coins.  The colorful race banners and tokens add a visually stunning element to the game as you deploy your races on the different regions of the board.

As if magical creatures weren’t already powerful enough, you can also combine your magical races with one of 20 Special Power Badges.  Not only does this make for some funny combinations (Commando Dwarves and Flying Sorcerers being some of the best), but it also gives you extra abilities that you can use to trick your opponents and attack.

Certain combinations are more powerful than others, allowing you to build on the race’s innate abilities and deliver a crushing blow to your opponents.  Diplomat Skeletons can keep an opponent from attacking for a turn and then ruthlessly attack the rest of the board, earning some serious tokens and leaping ahead in the gameplay.  Discovering the best combinations is part of what makes Small World so great for repeat playing!

The Decline Of Civilization

While the goal of Small World is to expand your empire and earn as many Victory coins as possible, sometimes your race will become over-extended, requiring you to sacrifice your current empire in order to build a new one.  Not everyone has the stomach to make the hard calls and put their weakened magical race “In Decline”, but this kind of ruthlessness is often required to fight your way to victory.

Putting your weakened race In Decline forces you to get rid of your Special Power and void one of your turns, but your next turn allows you to build a new civilization with a new race and Special Power combination.  It takes a lot of strategy and a bit of luck to maneuver, but it adds a fun and challenging dimension to the game that makes Small World more than just what it seems on the surface.

The Fun Of Small World

Because Philippe Keyaerts designed Small World as a follow up to his game Vinci, players who grew up playing Vinci will recognize many similar elements of gameplay such as conquering territories for points and choosing special abilities.  However, the addition of dice to the game adds an interesting element of luck that can turn strategy on its head.

The magical creatures are creative and zany, and the ability to mix and match magical races with Special Powers means that no two rounds of gameplay will ever be alike.  Although they may not usually like the same games, fans of strategy board games and fans of fantasy will both find plenty to love with Small World!

How to Play Small World